Authorities asked to investigate the import of 6,000 swords before the 2019 Easter Sunday attacks A woman walks past St. Anthony’s Shrine on the first anniversary of the Easter Sunday attacks in Colombo on April 21, 2020. (Photo: Ishara Kodikara/AFP)

A Sri Lankan court has issued notices to high-ranking government officials in a writ petition filed by Cardinal Malcolm Ranjith regarding the failure to investigate the importing of 6,000 swords before the 2019 Easter Sunday attacks.

The Court of Appeal ordered issued the notices on Feb. 18.

A large number of swords were found in mosques and other places after the suicide attacks on Easter Sunday in 2019. According to Sri Lankan law, persons possessing such weapons can be arrested.

Cardinal Ranjith called on the security forces to conduct investigations into the importation of the swords by a group of people.

President's Counsel Sanjeewa Jayawardena, appearing for Cardinal Ranjith, said information had been received that about 6,000 swords had been imported into the country before the Easter Sunday attacks.

Jayawardena said most of the swords are currently circulating freely in the country, posing a serious threat to national and public security.

The Court of Appeal directed that the petition be called back on March 5. 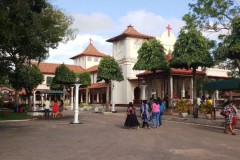 The United States has charged three Sri Lankans over the deaths of five Americans in the Easter Sunday attacks.

Cardinal Ranjith, who is the archbishop of Colombo, said all Catholics now have to seek justice from God's court for this incident.

"Pray for justice for those killed in the Easter attacks," he said at the Ash Wednesday service on Feb. 17 held at St. Anthony's Shrine in Kochchikade, Colombo.

St. Anthony's was one of the three churches attacked by Islamic extremists and at least 93 people were killed there.

"It had now been proven that the attack was organized and there are groups in the country and other countries behind this," the prelate said.

"It is a national responsibility to punish the perpetrators, and people of other religions should unite to demand justice and create a new culture in the country that preserves unity and coexistence among all religions."

Nirmal Soysa, an Easter Sunday bomb victim from Negombo, said he was troubled over the swords.

"It's been almost two years now but no one knows why these swords were brought in. Some media shows displayed these swords, creating fear among people. We hope our archbishop will not withdraw the writ petition until the purpose of importing the swords is clarified," said Soysa.