Priests and relatives carry the coffin of a bomb blast victim after a funeral service at St. Sebastian's Church in Negombo on April 23, two days after a series of bomb blasts targeting churches and luxury hotels in Sri Lanka. (Photo by Jewel Samad/AFP)

Cardinal Malcolm Ranjith has said Sri Lankan officials who failed to act on warnings about the planning of the Easter Sunday bombing attacks should be sacked.

The so-called Islamic State has claimed responsibility for the coordinated blasts that killed at least 359 people and injured more than 500. A domestic extremist group, National Thowheeth Jama'ath (NTJ), has also been implicated. More than 40 suspects have been arrested.

Following the bombings, it became known that Sri Lankan authorities failed to act on intelligence warnings that terrorists had planned the attacks, including how they would target Catholic churches.

Cardinal Ranjith — who is the archbishop of Colombo — told CBC radio that the behavior of high-level officials, such as Defense Secretary Hemasiri Fernando, who failed to act on the information was absolutely unacceptable.

“These kinds of officials should be immediately sacked, removed from these positions. And human beings who have a feeling for the needs of others and for the people must be inserted into these positions,” Cardinal Ranjith said.

The government has reportedly said it had been warned three times in recent weeks that a possible attack during the holy holiday was imminent.

CNN reported that India's intelligence services had passed on warnings to Sri Lankan officials prior to the Easter bombings based on information they had obtained from an Islamic State suspect.

The cardinal said if he had been warned about the terrorists’ plans he would have cancelled Easter Sunday Masses and even Holy Week events.

“I would have cancelled because, for me, the most important thing is human life. Human beings, they are our treasure,” he said. 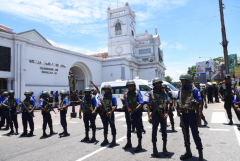 Cardinal Ranjith pointed out the human cost of the attacks, which included the bombings of St. Sebastian’s Church in Negombo and St. Anthony's Shrine in Kochchikade.

“Entire families have been wiped out — husbands, wives, children and parents and grandparents. And it's tremendous, you know,” he said. “We just can't imagine the suffering that had been heaped on human beings by this kind of activity.”

Some 800 people were attending Easter Mass at St. Sebastian’s at the time of the attack which killed 91 and injured hundreds.

“I went and solemnized two funerals. One in Negombo, where there were two families where five people were killed in the same two families,” said Cardinal Ranjith.

“And then in the afternoon, I went to a funeral where a father, mother and two daughters were killed. So, it was tremendous pain for people to see this.”

The Zion Church in Batticaloa was also targeted by the terrorists as were the Shangri-La, Kingsbury and Cinnamon Grand hotels in the capital.

Tourism Development and Christian Affairs Minister John Amaratunga told ucanews.com on April 23 that neither Prime Minister Ranil Wickremesinghe nor the rest of the cabinet were aware of such warnings.

Some 40 foreign nationals holidaying in the island nation were also killed by the terror attacks. Among the dead were tourists from Bangladesh, China, India, Japan, the Netherlands, Portugal, Saudi Arabia, Spain, Switzerland, Turkey, the United Kingdom, the United States and two people holding dual Australian and Sri Lankan passports.