Cardinal Malcolm Ranjith has asked the Sri Lankan government to provide a copy of the final report of the presidential commission that investigated the Easter 2019 terror attacks.

"If the presidential commission and the government do not give justice to the Easter attack victims, I will go to the International Court of Justice and seek justice," the outspoken prelate said on Feb. 11.

The public and religious leaders blamed politicians and government officials for failing to prevent the attacks.

Former defense secretary Hemasiri Fernando and former police chief Pujitha Jayasundara were remanded in custody for failing to inform the public and prevent the attacks despite receiving warnings of a possible attack.

"Our people are not ready to tolerate this even more. If we do not get justice from the commission or the government, we will have to take another decision," said Cardinal Ranjith.

The final report of the presidential commission probing the attacks was handed to President Gotabaya Rajapaksa on Feb. 1. The six-volume report consists of 472 pages and 215 attachments.

The commission was appointed by former president Maithripala Sirisena in 2019 and recorded evidence from 457 people over a period of 214 days.

Sirisena and former prime minister Ranil Wickramasinghe were accused of failing to prevent the attacks despite the prior intelligence made available on the impending attacks. 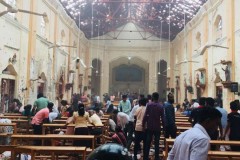 Minister of Mass Media Keheliya Rambukwella said a special date will be set to discuss the commission's final report.

"I made a request to the commission. It's not just about those who did not stop the attack, it's also about finding out who is behind this attack," said Cardinal Ranjith.

President Rajapaksa has confirmed that the report has been referred to the relevant authorities for prosecution.

Anton Ravi Fernando lost several members of his family in the attack on St. Sebastian's Church in Katuwapitiya.

"We lost everything but the politicians are trying to take advantage of this. Because of this attack, some people came to power and some lost power, but there is still no justice for the victims," he said.

The United States Justice Department has announced that three Sri Lankan citizens have been charged with terrorism offenses for the deaths of five Americans in the attacks, including conspiring to provide material support to Islamic State, a designated foreign terrorist organization.