An election observer from the Centre For Monitoring Election Violence stands guard as health officials and medical workers cast their postal ballots for the parliamentary election in Colombo on July 13. (Photo: AFP)

A Sri Lankan cardinal has urged candidates not to use him or his photographs in their election campaigns.

Cardinal Malcolm Ranjith said it had been brought to his notice that certain candidates contesting the forthcoming general election have utilized photographs taken with him for propaganda purposes.

"In any case, neither I nor the Archdiocese of Colombo have aligned ourselves with any political party or connected groups or persons seeking electoral gains. Such acts have been done without my consent," said the 72-year-old archbishop of Colombo in a media statement on July 18.

"It is an inalienable right of every citizen to exercise his or her right to vote in keeping with the dictates of their own conscience."

The general election was due to be held on April 25 but had to be postponed due to the Covid-19 pandemic, which led to a nationwide lockdown from March. The Election Commission shifted the date to June 20 but it was then changed to Aug. 5 due to the Covid-19 situation.

A total of 225 members of parliament will be elected in a poll contested by 20 political parties and 34 independent groups.

Some 7,452 candidates are contesting the election, with 3,800 from independent groups. The Sri Lanka Podujana Peramuna, the biggest party, has formed an alliance with a number of other parties. Some 16 million people are eligible to vote.

Cardinal Ranjith made a similar statement for political parties not to misuse his name and photographs during the presidential election campaign in 2019. The cardinal said he would not meet any presidential candidate if justice was not delivered.

Several posts on social media and websites claimed that the archbishop of Colombo supported various candidates.

"In this election context, my name is being quoted for the benefit of political parties and the postings are very unfair," said Cardinal Ranjith in October 2019. 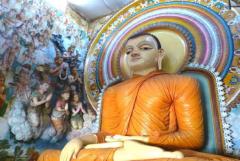 Anton Nalin, a Catholic teacher, said Catholic bishops or priests do not display loyalty to any political party or government like some Buddhist monks.

A video of a Catholic priest urging people to vote for the ruling party recently went viral on social media.

The media unit of Kurunegala Diocese announced that the individual in the video clip was neither a Catholic priest in the diocese nor does he belong to any other Catholic diocese in Sri Lanka.