Country has not made sufficient progress in fulfilling commitments 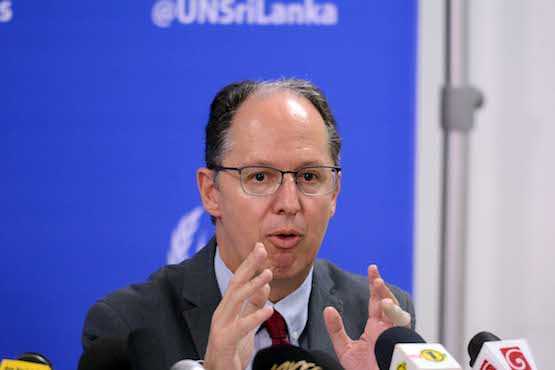 UN special rapporteur Pablo de Greiff addressing the media in Colombo at the end of his 14-day mission to Sri Lanka on Oct. 23. (Photo by ucanews.com)

Activists have called for concerted action to implement United Nations recommendations on facing up to the bitter legacy of Sri Lanka's long civil war.

As well as a need to further investigate allegations of abuses by both Sri Lanka's military and secessionist ethnic Tamil Tigers, there are outstanding issues such as the fate of large numbers of missing persons.

Pablo de Greiff, the UN special rapporteur on the promotion of truth, justice, reparation and guarantees of non-recurrence, said the government had not yet fulfilled its commitment to transitional justice.

The UN was able to get involved in post-conflict issues in Sri Lanka when there was a change of government in 2015, with President Maithripala Sirisena coming to power.

UN special rapporteur de Greiff has made five visits to Sri Lanka. The first was in March 2015, and the most recent 14-day trip ended on the Oct. 27 of this year.

Up to 100,000 people died in the civil war, which began in 1983 and ended in 2009 with military defeat of the Tamil Tigers who stand accused of abuses, including political assassinations and suicide bombings. The Sri Lankan army was accused of gross human rights violations, including 'disappearances' and mass extrajudicial killings.

The UN has found that Sri Lanka has the second highest number of 'disappearances' in the world and that 12,000 people disappeared after being detained by the military.

The UN special rapporteur welcomed lifting of an earlier ban on UN involvement as well as progress in some areas, including on establishment of an Office of Missing Persons.

However, de Greiff said that determination of the fate of missing people should be made an urgent priority.

Overall, the government had failed to ensure adequate advances on key issues such as land injustices and repealing of the draconian Prevention of Terrorism Act.

Furthermore, de Greiff called for an end to overbearing and intimidating forms of surveillance, especially against women and human rights activists.

He sought implementation of a comprehensive transitional justice strategy based on the uncovering of what occurred during and after the conflict and the dispensing of justice for past wrongs.

The issue of reparations to people unfairly treated in the past, or the families of victims, should include "acknowledgements of responsibility."

Likewise, the government had failed to live up to promises given to Sri Lankans.

This had resulted in a series of protests this year over people still missing, land occupied by the military, remaining political prisoners and a variety of other grievances.

Fernando said the UN special rapporteur's comments and recommendations did not seem to reflect the serious level of desperation and anger amongst victims and their families.

He added that it should be not forgotten it was the government that committed more than two years ago to establish a special judicial mechanism with participation of foreign judges, prosecutors, lawyers and investigators.

This undertaking was given in the context of large numbers of Sri Lankan survivors and victim's families not being able to obtain justice through domestic legal mechanisms.