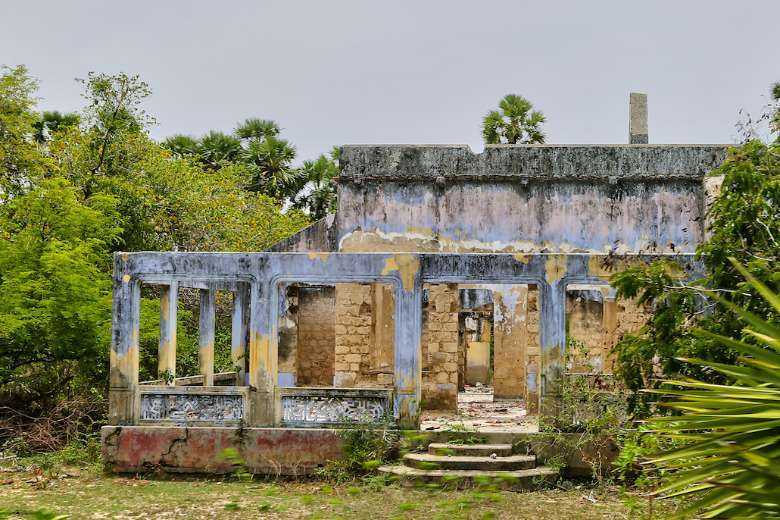 The remains of a house destroyed by bombing during the civil war in Jaffna, Sri Lanka. The United Nations estimates about 40,000 people were killed during the 26-year civil war between the Sri Lankan Army and the Liberation Tigers of Tamil Eelam. (Photo: AFP)

Rights activists have called on the Sri Lankan government to release all detainees who have been held in long-term custody without legal action and to repeal the Prevention of Terrorism Act (PTA).

Sixteen long-term prisoners of the Liberation Tigers of Tamil Eelam (LTTE) who were arrested under the PTA were released under a presidential pardon on June 24, Poson Poya Day. No charges were filed against some detainees but they remained in jail as terror suspects for many years.

Father C.G .Jeyakumar, former director of Caritas Human Development Centre, urged the government to repeal the PTA, which has permitted a system of abuse to grow with impunity, and called for the release of all detainees held under the PTA without trial.

"The presidential decision to pardon a group of LTTE suspects held in custody for many years without trial, and neglected by successive governments, is a welcome gesture meant to commemorate Poson and reaffirm the Buddhist message of peace and harmony for the world community at this critical juncture of the Covid pandemic," he said.

Father Jeyakumar and Buddhist monk Ven. Kalupahana Piyarathana Thera joined with the Sri Lankan Collective for Consensus (SLCC) to urge the government to give favorable consideration to similar cases.

The SLCC is a group of individuals drawn from multiple sectors of society, religion, academia and non-governmental organizations.  They are committed to a Sri Lanka that is founded on ideals of pluralistic coexistence, human rights and justice.

"There is a much larger number of similarly situated persons continuing to be held in custody whose cases also need to be considered with equal compassion," the SLCC said in a statement on June 24.

The PTA was introduced in 1978 as a temporary measure during the protracted civil war which ended in 2009.

"We believe that this course of action is in the interests of the human rights of all Sri Lankans and will also help to preserve the GSP Plus tariff concession, which is one of the pillars of the sustainability of our economy," said the SLCC.

The European Parliament adopted a resolution calling on the EU Commission to consider a temporary withdrawal of Sri Lanka’s GSP Plus status and other benefits.

The GSP Plus scheme offers the incentive of better access to the EU market for the country's exporters. The bloc is the country's second largest trading partner after China.

The resolution cited the Sri Lankan government's persistent failure to adopt and enact human rights reform and repeal the PTA.

EU members have voiced strong opposition to the PTA, which grants the police broad powers to search, arrest and detain civilian suspects. The act has led to sexual abuse, torture and forced confessions.

The US welcomed the release of the 16 LTTE prisoners. US ambassador Alina B. Teplitz said the speedy release of prisoners is welcome but the pardon of former parliamentarian Duminda Silva, whose conviction the Supreme Court upheld in 2018, undermines the rule of law.

The Bar Association of Sri Lanka criticized the president's pardon of Silva. The association questioned whether the president followed due procedure in releasing the former MP, who was sentenced to death for the murder of Bharatha Lakshman Premachandra.

The SLCC said the pardon of Silva does not fall into the category of release of persons in long-term custody without legal action being taken against them.

"We do not condone political interference with the criminal justice system and the arbitrary release of convicted persons because of political or other reasons," said the SLCC.

I. Arul, a member of the Catholic student union, said the PTA reduces space for free expression, assembly and association and it has served as a license for enforced disappearances, sexual violence and torture.

"Many Tamils have been detained for long periods under the PTA in inhumane conditions and subjected to torture. Many Muslims were also detained under the act after the Easter Sunday attacks. The PTA must be repealed immediately — it has no place in a democracy," said Arul.