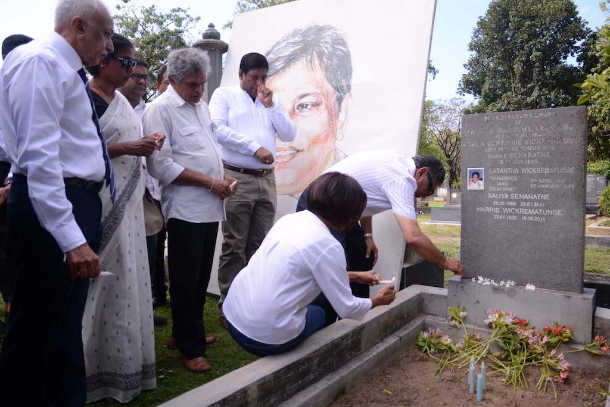 The 11th anniversary of the slaying of veteran journalist Lasantha Wickrematunge was commemorated on Jan. 8 with the participation of his family, journalists and civil activists in Colombo. (ucanews photo)

Media personnel are calling for justice for veteran Sri Lankan journalist Lasantha Wickrematunge while decrying the slow pace of the investigation into his death.

Wickrematunge's assassination remains an unsolved problem on its 11th anniversary. The veteran journalist was gunned down in broad daylight on Jan. 8, 2009 on a public highway, a few hundred meters from a security checkpoint.

Kelum Wickramasinghe, a senior journalist, said Wickrematunge and other reporters were killed simply because they felt duty-bound to disclose what they thought the public ought to know.

"Wickrematunge is a name that must be read by scholars researching the depth and weight of investigative journalism. He should be a journalist who can readily be named when someone is asked to nominate a brave journalist," said Wickramasinghe. "When will the criminals who killed him be brought to justice?"

Eleven years have passed since the assassination of the journalist but those responsible remain at large.

"Who is he? Why do people care so much for one person? What is his significance? We hope that the new government will finalize the legal inquiry into this matter. Otherwise this crime will always be a blemish on us," Wickramasinghe added.

The journalist was allegedly linked indirectly to terrorist activities, acting as a ghost for Tamil guerrillas. The allegations were used to prepare the ground for his arrest. Wickrematunge's murder was a key issue before the elections.

Activist Naveen Prasanna is among those demanding answers to his slaying. "Punish the perpetrators. We will never give up until we find who was behind the death of this brave journalist," he said.

Cartoonist and journalist Prageeth Ekneligoda disappeared in 2010 in Colombo, two days before the presidential election. Journalist Subramaniyam Sugitharajah took photos of the bodies of five Tamil students who were murdered by the Sri Lankan army. The photos were published on Jan. 24, 2006. That day Sugitharajah was shot and killed on his way to work.

The lack of progress in investigating journalists’ deaths led to the country's appearance from 2008 on the Committee to Protect Journalists' annual impunity index, which highlights countries where journalists are slain and their killers remain free. Impunity for crimes against journalists remains a hot-button issue in Sri Lanka.

Prasanna has called for an end to impunity, starting investigations, punishing perpetrators, providing justice for the victims as well as compensation for the families of victims such as supporting the children of slain and missing journalists.

"We urge the government to pursue justice until the perpetrators are punished," he said.