The home of a Muslim family burned by a Buddhist mob in Aluthgama in June last year. (Photo by Niranjani Roland)

The Sri Lankan government will introduce a new bill in parliament seeking to ban racist and religious extremist groups in the Buddhist majority country.

The bill is to be introduced during the new government’s 100 Days Work Program, National Executive Committee member Azath Salley told ucanews.com on Thursday.

The work program is a series of promises that President Maithripala Sirisena’s government aims to fulfill in the first 100 days in office.

“We experienced many hate speeches and campaigns against other minor religions and saw many attacks on Muslim and Christian places of worship during the last administration,” Salley said.

He was referring to the government of Mahinda Rajapaksa, which he accused of funding and nurturing certain extremist organizations to create racial and religious tensions. 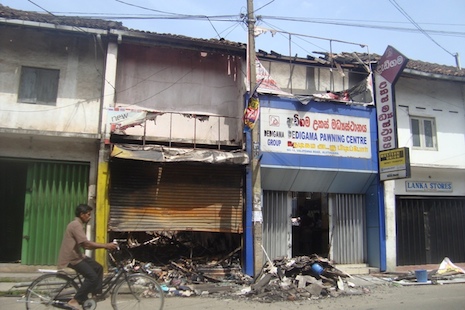 These include the Buddhist group Bodu Bala Sena (BBS), whose members were accused of attacking Muslims in two coastal towns in July last year that left four people dead and injured 80 others.

“We need a more disciplined society and these attacks on minority religions should not take place in future,” Salley said.

“This call for all citizens to give up racial and religious hatred must be profusely worked on in order to dispel fear, hatred, vengeance and vilification campaigns,” the priest told ucanews.com.

Jehan Perera, executive director of the National Peace Council, said that in past years there was a campaign against Muslim communities as well as Christian ones that posed a threat to the entire nation.

“Government leaders and the media need to pay more attention to statements that affirm the multi-religious nature of the country,” he said, adding that there was a “need for civic education about the rights and responsibilities of religious communities”.

“Most people would disagree with the use of violence by extremists, but they would also feel that the extremists are highlighting real problems,” Perera said.

But opponents of the proposed bill say they have no intention of abiding by such legislation.

BBS general-secretary, Venerable Galaboda Attha Gnanasara Thero, has attacked the bill and vowed to defy any ban on his group’s activities.

He said the government must protect the Buddhist majority from a growing threat posed by Muslims.

“The government should put Buddhism first and the state should protect it. Muslims have erected mosques at many Buddhist worship places around the country,” the monk told ucanews.com.

“We will demonstrate on the streets against the new bill,” the monk said. “We will never respect the new bill, and if it passes in parliament then we will break the law,” he said.