Police want him on charges of creating racial and religious disharmony 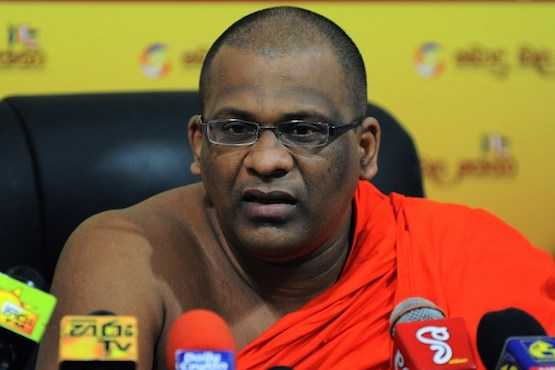 This file photo taken on Oct. 7, 2014 shows controversial Sri Lankan Buddhist monk Venerable Galagoda Aththe Gnanasara Thero during a press conference in Colombo. The monk has been linked to a wave of hate attacks targeting the country's Muslim minority. (Photo by S. Kodikara/AFP)

Several complaints have been lodged against Venerable Galagoda Aththe Gnanasara Thero, general secretary of Bodu Bala Sena (BBS), a Buddhist nationalist organization who have been blamed for a rise in attacks against the country's minority Muslim and Christian population.

The Secretariat for Muslims, a civil society organization, has documented 20 such incidents over the last six weeks, including several attacks on mosques and Muslim-run businesses. Rights groups and lawmakers blamed the government for failing to halt the wave of attacks.

"Police are looking to arrest Venerable Galagoda Aththe Gnanasara Thero but so far officers have failed [to bring him in]," said a police officer from the media unit in Colombo on May 30.

In one widely publicized instance Venerable Gnanasara Thero went to the office of the Minister of National Coexistence, Dialogue and Official Languages and challenged him to a verbal duel. His BBS group said, on another occasion, that Muslim women should remove their head covers because "We have a right to know whether he or she is a man or woman."

The BBS is also allied with the 969 Movement, a radical Buddhist group known for fomenting hatred against Muslims in Myanmar in 2014.

The National Christian Evangelical Alliance of Sri Lanka, an umbrella movement for evangelical churches, said there have been over 20 incidents of violence against Christians this year so far. "Since the current government took office in 2015, over 190 incidents of religious violence against churches, clergy, and Christians have been recorded," said the alliance in a statement May 27.

A large protest against a Christian place of worship on May 18 was staged in Devinuwara in Matara district by approximately 30 Buddhist monks and a mob of about 2,000 people, the alliance said.

"The freedom of religion or belief is a fundamental right guaranteed by the constitution but protests continue to occur unrestrained against minority places of worship," the Christian evangelical alliance said.

"The 2008 government circular requiring new places of worship to register continues to be misapplied by local authorities to close down churches and threaten Christian clergy to discontinue their activities," it said. The alliance called on the government to ensure the protection of minorities and their places of worship.

In 2014, four people were killed in clashes in the coastal town of Aluthgama. More than 2,000 people were displaced and 17 mosques attacked. The BBS was accused of instigating the attacks but the group denied the charges.

The National Peace Council, an independent organization dedicated to building peace, said that so far no one has been arrested. "The failure of the police to protect people who are being subjected to violence is an abdication of the government's duty to protect all citizens equally," said the council in a statement on May 28.

"Several attempts had been made by some extremists including Muslim ministers to arrest the monk but we are with him," Sudaththa Thero told ucanews.com on May 30.

"Buddhists are facing a serious threat today and many temples have been destroyed," the monk added.