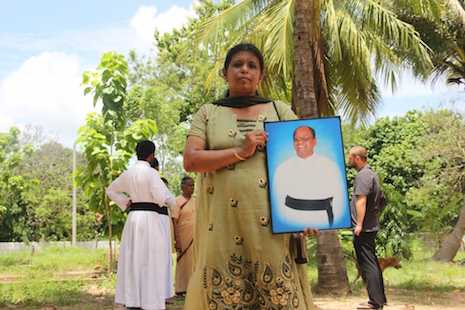 Madona Mariampillai holds a photo of her brother, Fr Manuelpillai Sarathjeevan, who died during the final days of the war (Photo by Quintus Colombage)

Despite restrictions remaining in place, Sri Lanka's Tamil minority openly commemorated their war dead on Monday, the sixth anniversary of the end of the island's decades-long civil conflict.

Hundreds of Tamils lit oil lamps and gave offerings of flowers during a ceremony in Mullivaikkal village that was held openly for the first time after the country's new government partially lifted a ban on commemorating Tamil victims.

Mullivaikkal is the northern village where Tamil Tiger rebels fought their last stand after 37 years of war, but for years, villagers were unable to mark the anniversary. While some commemorations by Tamils are now allowed, street processions and protests to commemorate the dead are banned due to a court order.

Father Nehru Ganaraj, who spent many nights huddled with people in bunkers during the last days of fighting between the military and the Tamil rebels in 2009, criticized remembrance restrictions, saying Tamils are not allowed to attend religious services to commemorate their dead.

"If the government is serious about genuine reconciliation then they must give us some freedom,” he said.

"The war ended in 2009 but six years later the country has yet to find its path of reconciliation and to heal the wounds of war," he said.

The military declared an end to the bloodshed when it finally killed Tiger leader Velupillai Prabhakaran at a lagoon on the edge of Mullivaikkal village on May 18, 2009, ending his long campaign for a separate homeland for ethnic minority Tamils. The United Nations estimates that some 40,000 Tamil civilians were killed in the district that includes Mullivaikkal, where they had fled after the government declared it a safe area.

Cabinet spokesman Rajitha Senaratne told media earlier that the government will mark the anniversary from this year onward as a Remembrance Day for the entire nation. The previous government under former president Mahinda Rajapaksa held “Victory Day” celebrations, while attempts by Tamils to remember their dead were broken up by security forces. Many families instead held private events.

Madona Mariampillai lost her brother, Fr Manuelpillai Sarathjeevan, during the final days of the war.

Fr Sarathjeevan died of a heart attack as he was accompanying refugees out of the conflict area.

"I am proud of my brother because he sacrificed his life for innocent Tamil civilians," Mariampillai said.

"The present government has realized the folly of denying the right to memory to the Tamils, and has prudently decided to tone down the one-sided victory parade of the government.”

Despite the new government’s more conciliatory tone, Suresh Premachandran, a lawmaker with the Tamil National Alliance party, noted that processions to commemorate the dead were still banned, and criticized the Sirisena regime for not going far enough.

"The new government tells the international community that they are treating the Tamils with dignity. But they get court orders to prevent Tamils from remembering their dead," Premachandran said.

Aruldas Vathani, 38, a mother of three, said that her husband was also killed at the end of the war on May 13, 2009. He died in a shelling attack.

"There are more widows like me who struggle as breadwinners to survive," she said. "We attended for the memorial ceremony even though there is a court order. We have lost everything.”

With additional reporting by AFP