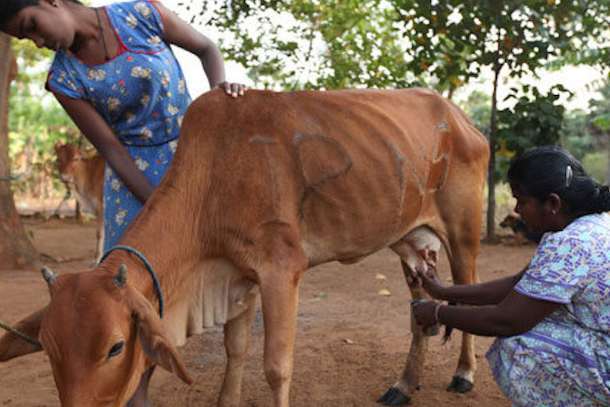 Animal lover Nirmal Sanjeewa has called for support from all parties to back the Sri Lankan government’s decision to ban cattle slaughter.

He said cattle help rice farmers and provide milk for children. "It is true that the life of every animal is the same. As the Lord Buddha said in his preachings, everyone loves life and fears death," he said.

The proposal by Prime Minister Mahinda Rajapaksa to ban cattle slaughter was approved by his parliamentary group on Sept. 8, but cabinet spokesman Keheliya Rambukwella said the ban was postponed to October.

Ven. Bowatthe Indrarathana Thera set himself on fire in protest against the slaughter of cattle outside a Kandy temple in 2013.

Buddhist nationalists are campaigning against the Muslim halal method of slaughtering animals.

Eating beef is common among many Buddhists, Christians and Muslims despite Buddhist restrictions on the killing of animals.

"Despite calls from a number of religious leaders, including Buddhist prelates, for a long time to stop the slaughter of cattle, no action had been taken. Prime Minister Mahinda Rajapaksa appreciates the attention paid to this matter," said Ven. Wimaladhamma Thera.

"In a country where Buddhist philosophy is safe, rulers must act with a view to non-violence," said Ven. Upali Thera. MP Wijeyadasa Rajapaksa presented a proposal in 2009 calling for the wholesale ban on cattle slaughter, but the government did not approve the proposal.

Kandy Municipal Council passed a resolution to ban cattle slaughter within the boundaries of Kandy’s municipal area in 2012.

In 2013, Buddhist activists protested in front of Fort railway station in Colombo demanding a written assurance from the government to introduce laws banning cattle slaughter and sent a letter to the president threatening another self-immolation, but the government did not respond.

Police also arrested a monk who attempted to immolate himself and three monks began a hunger strike demanding an end to killing cattle.

Kularaj Perera, president of the Animal Production Farmers' Association, said many problems will arise if cattle slaughter is banned in the country.

As most cattle in the country are males, if they are not killed, there should be a scheme for those animals, he said.

Perera said slaughterhouses should be built and proper procedures implemented so that cattle can be slaughtered without cruelty to the animals. "Failure to do so would be a fatal blow to dairy farmers," he said.

Muslims have also expressed opposition to the ban on cattle slaughter.

"The ban may deepen the divide between the Buddhist majority and Muslim minority since the country has a history of anti-Muslim issues," said a Muslim in Colombo who asked to remain anonymous.

The last decade has seen an escalation in communal clashes. Human rights organizations have highlighted increasing incidents of violations of rights of Muslims in the country.

Buddhists account for 70 percent of Sri Lanka's population and Muslims make up about 10 percent. In the last five years, some Buddhist groups have called on Sinhalese people to boycott Muslim-owned shops.

Large-scale beef suppliers and beef traders are opposed to the ban on cattle slaughter. They say importing the meat will be too expensive. Dairy farm owners have also said that caring for aging cattle until they die will incur additional costs.

Sanjeewa said the cow is first slaughtered in the minds of people who are greedy for beef. "If you refrain from eating meat, then you are indeed against cattle slaughter," he said.