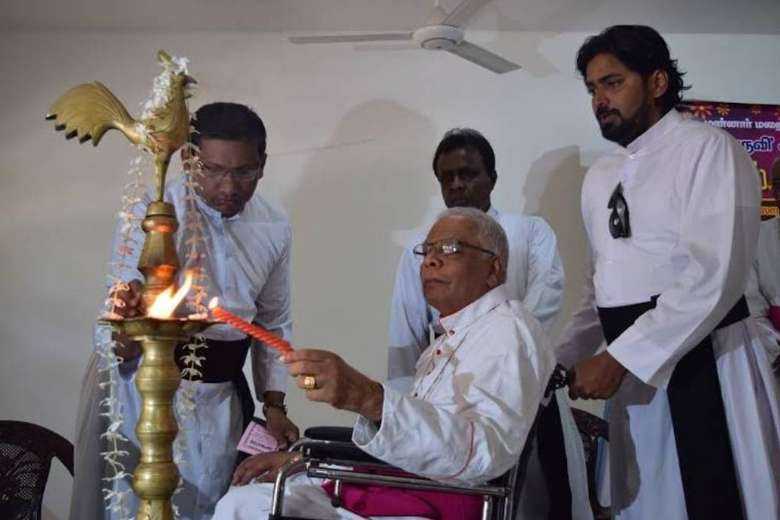 Bishop Rayappu Joseph lights an oil lamp during the launch in 2016 of ‘A Living Hero’, a book about his life. (Photo: UCA News reporter)

Thousands were killed and disappeared during the 26-year war that ended in 2009 when the army defeated Tamil rebels. Both sides were accused of serious human rights violations. Many Catholic priests were killed or went missing.

Bishop Joseph, who died on April 1 at the age of 80, raised his voice nationally and internationally for victims.

“The bishop was a vocal critic of the government, military and the Liberation Tigers of Tamil Eelam (LTTE), which resulted in him being threatened,” said Saminda Antony Fernando, a friend who attended the prelate’s funeral service.

“The bishop was criticized by local media as a LTTE supporter but he was a truly good shepherd who loved his lambs immensely.”

Fernando said Bishop Joseph was regarded as a rebel by some Sinhalese in the south because he relentlessly spoke out against the suffering of his Tamil people during the war.

Without even thinking about his own life, he defended his oppressed people and demanded that civilians not be harassed during military operations.

He opposed killings and abductions by all parties and the Tamil Tigers also opposed him, said Fernando.

During the civil war, Fernando was scared to travel with the bishop in his vehicle for fear of being bombed or shot as the bishop had many enemies.

“He appeared on behalf of the people over war crimes, land grabs, disappearances and violations of the rights of the Tamil community,” he said.

Bishop Joseph demonstrated immense strength of character to speak up publicly and issue public statements when other religious figures and activists had fallen silent due to the threat of assassination.

One of his most courageous actions was during the 2005 presidential election. Although the LTTE effectively forbade the Tamil people from voting, Fernando said that the bishop assisted people to participate in the democratic process and risked his own life doing so.

Thousands of Tamil and Sinhala Catholics are mourning Bishop Joseph, the retired bishop of Mannar, who died while receiving treatment in hospital after being in poor health since 2015.

Cardinal Malcolm Ranjith said Bishop Joseph was committed to the cause of peace in Sri Lanka and greater understanding between the various ethnic and religious groups.

"I remember how he insisted on a peaceful and negotiated settlement of the issues concerning the conflict and encouraged civil society leaders to actively engage. Unfortunately, those efforts did not succeed," said Cardinal Ranjith, who is also the archbishop of Colombo.

"I wish to remember him as a zealous advocate of peace and intercultural understanding among all communities in this country."

Nimal Perera, who worked under Bishop Joseph, went to Mannar with a few other friends from the South to pay their respects to the bishop early on Good Friday.

"The bishop was a true religious leader who sincerely stood up for Tamils and their rights and justice during the war and after the war," said Perera.

"He did great service for the Basic Christian Communities and appointed two of his priests as coordinators in Mannar to strengthen units.

"The bishop was seriously ill but when I went to see him but he recognized me even though I am a layman. Some of the priests around me were surprised. He recognized me and laughed a lot like a little kid."

In the introduction to his book, Father Patrick said the bishop was a straightforward person ready to jump into dangerous situations for the liberation of humanity or for the cause of fundamental rights.

Bishop Joseph obtained a doctorate in canon law at the Pontifical Urban University in Rome. He was later appointed a professor at St. Xavier's Seminary in Jaffna. He was vice-president of the bishops' conference in Sri Lanka and chairman of the Catholic National Commission for Laity. He was fluent in Italian, German and English.