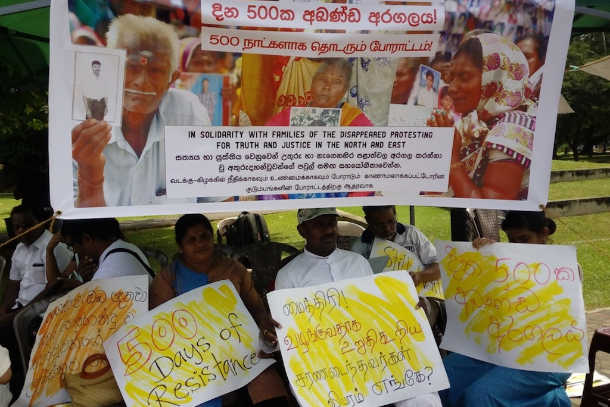 Activists and families of the disappeared demonstrate for their loved ones in Colombo in 2018. Tamils have long been demanding accountability for crimes they allege were committed during the nation's long and bloody civil war. (ucanews.com photo)

As the government of Sri Lanka faces mounting protests by angry mothers and families of victims of enforced disappearance from the nation's bloody civil war, a program was unveiled to quell fears their cases were being neglected and their pleas falling on deaf ears.

Tamils have long demanded accountability for alleged crimes committed during the war. But their frustration has begun boiling over into anger as successive governments have failed to honor their promises to find out what happened to their loved ones, they say.

The government has always denied its military had anything to do with these suspected cases of enforced disappearance.

At a time when tensions between the Sinhala community and government officials are running high, the project focuses on healing rifts between the two groups caused by "misunderstandings," officials say.

The Office on Missing Persons (OMP), tasked with bringing closure to any cases where a husband, son or other relative vanished without trace, has set up its new communications campaign to keep families updated about ongoing probes and clear up any confusion, which it claims is rife.

Tens of thousands of people disappeared in mysterious circumstances during the quarter-century war that ended a decade ago and caused at least 100,000 casualties.

Those seeking the truth suspect the state had a hand in many of these. After waiting more than 10 years to find out the truth, they are running out of patience, they say.

The OMP campaign, dubbed "Pain never disappears, let's fulfill our responsibility," adopts a sympathetic approach in seeking to mollify the bereaved families by showing they have not been abandoned.

It comprises video and audio content including news reports that highlight the profound impact this phenomenon has had on the families of the disappeared.

While the OMP ranks as a government department — it was set up to investigate tens of thousands of missing persons after years of international pressure — it is an independent institution with a mandate to establish the truth.

It also searches for those who went missing in other periods of political strife, including student and other uprisings in the 1970s and 1980s.

OMP chairman Saliya Pieris said Sri Lanka has an obligation to do all it can to dig up answers to give the families closure and peace.

"The impact on the families is just devastating. It influences them in many profoundly painful ways," said Pieris, who was appointed president's counsel, an honorific comparable to queen's counsel in Britain.

"It affects their mental well-being, livelihood, health and their outlook on life," he said.

Vithusha Thiruniraichchelvi, a Tamil Catholic from Mannar who is still waiting for answers, welcomed the latest move by the OMP.

She said it was important to keep the Sinhala community apprised of the latest developments in the ongoing investigations, and raise awareness of the pain and suffering the victims' families are still experiencing to this day.

Thiruniraichchelvi said her son and several other relations surrendered to the army in May 2009 after a general amnesty for all those who had rebelled against the state was announced.

She said the last time she ever saw them was when a bus carried them off to hand themselves in. They thought they would sign some papers and be forgiven and exonerated.

"I still don't know where they are," the Tamil activist said.

Like Thiruniraichchelvi, many people harbor dreams that their partners, parents or offspring are still alive, languishing in prisons or detention camps somewhere. The government has continuously rejected this view.

"They have built new roads and buildings in war-ravaged areas, but I don't think peace has returned. The core issues and roots of the civil war have yet to be addressed," Thiruniraichchelvi said.

"There can only be reconciliation when people acknowledge that thousands of people were killed and remain missing. The government must acknowledge this and promise it will never happen again."

Thiruniraichchelvi said many Tamils remain skeptical about whether the OMP is genuinely bent on finding the truth or is more of a smokescreen.