Vote may show support for deeper reforms in a divided nation 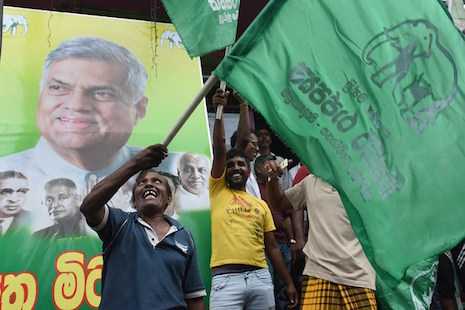 Rajapaksa was ousted as president in January after a decade in power. However, the former leader ran for one of 225 seats in parliament during an Aug. 17 vote. He secured a seat, but his party, the United People's Freedom Alliance, failed to seize control of the legislative body, ending his hopes of becoming Sri Lanka’s next prime minister.

Observers say this represents a rejection of values many critics have long associated with Rajapaksa, seen as a Sinhalese Buddhist nationalist.

“[The election] indicates a clear ‘no’ to ethnic and religious extremism, corruption, impunity, family-rule, centralization of power and militarization,” said Ruki Fernando, a human rights activist and consultant to the Justice, Peace and Integrity of Creation Commission of the Conference of Major Religious Superiors.

“The vote appears to be one that hopes for coexistence, rule of law, accountability, justice and devolution of power,” he said.

Rajapaksa remains a polarizing figure, in part because he oversaw the end of a decades-long civil war when military forces crushed ethnic Tamil rebels in brutal fashion in 2009. The United Nations estimates that security forces killed as many as 40,000 civilians, many of them Tamil, in the war’s final months.

Tamils and religious minorities often associate Rajapaksa’s record with these rights abuses and persecution. On the other hand, some parts of the majority Sinhalese population see him as a defender of the country’s Buddhist-majority heritage. Father Reid Shelton Fernando, a human rights activist and former chaplain of the Young Christian Workers Movement, said the rejection of Rajapaksa’s party is a rejection of religious extremism and interreligious violence.

"During the regime, the former president increased tensions among the people by fomenting ethnic and religious divisions," he told ucanews.com.

In addition, the main party representing Tamils dominated in the traditional Tamil areas of the north and northeast.

For some observers, the election was notable for who did not win at all. The controversial Buddhist nationalist group Bodu Bala Sena contested the poll as part of a coalition, but failed to win a seat.

Jehan Perera, executive director of the National Peace Council, said the results are a reflection of the “anxieties” ethnic and religious minorities feel about Rajapaksa.

“During the last three years of the period of rule by ... Rajapaksa, there was a rise in attacks against the Muslims, their places of religious worship and businesses,” Perera said. “These attacks, which were often led by nationalist Buddhist monks, were accompanied by police inaction. This smacked of government complicity.”

In an April report, the United Kingdom-based Christian Solidarity Worldwide warned of increasing rights violations since the end of the civil war. It highlighted religious persecution against Muslim and Christian minorities.

Rajapaksa suffered a surprise defeat in January presidential elections, losing to his former cabinet minister, Maithripala Sirisena. In the ensuing months, Sirisena has pledged democratic reforms and to prioritize post-war reconciliation. But some critics say Sirisena’s reforms have not gone deep enough.

The Aug. 17 election, then, was seen by many as another crossroads for Sri Lanka’s future, particularly when it comes to religious and ethnic minorities.