The aftermath of the suicide bombing at St. Sebastian’s Church in Negombo on Easter Sunday. (ucanews.com photo)

This article was first published on April 26, 2019

The sudden deterioration of the security situation in Sri Lanka has come as a shock to its people. Five days after a series of suicide bombings on Easter Sunday killed more than 250 people, injured over 500, wrecked three Christian churches and caused substantial damage to three five-star hotels, Sri Lanka continues to be in a state of siege. A nighttime curfew has been declared and there is vastly reduced traffic on the usually packed Colombo roads.

Rumors of further attacks are spread wildly and widely, forcing the government to ask people only to listen to official police warnings. The little-known National Thowheeth Jama’ath (NTJ), which has been identified as the source of the suicide bombers, has about 150 members. It is feared that many of them might be potential bombers. There is a high-priority security search for them. Until they are all found, the danger of another suicide bombing will remain.

The targeting of churches and hotels on Easter Sunday, and the high level of casualties, has generated massive international media attention. The suicide bombings by Muslims has brought Sri Lanka into the orbit of global Islamic extremism for which it is ill prepared. It is strange and frightening for Sri Lankans to find themselves being dragged into an international conflict they did not think about too much or wanted and over which they have so little control.

Ironically, less than six months ago, the Lonely Planet travel guide ranked Sri Lanka as the number one tourist destination for 2019. For nearly 10 years, since the end of the Sri Lankan civil war in 2009, the country enjoyed a perfect record of zero terrorist attacks. But close on 40 foreign nationals lost their lives in the Easter Sunday bombings for which Islamic State (IS), the internationally known champion of extremist Islam, has claimed responsibility.

Why was Sri Lanka chosen to be an IS target and why did suicide bombers want to give up their lives to attack Christians in a country where Christians are a small minority of about 6 percent of the population?

Christian-Muslim relations in Sri Lanka have, by and large, been cordial and accommodative, even as they join hands in common causes that affect them as minorities. Both Christians and Muslims, who account for 10 percent of the population, have faced a degree of harassment by the majority Buddhists and localized violence at times. But strangely it was Christians who became the targets of Muslim suicide bombers, which has given rise to several conspiracy theories.

Within the Catholic Church, which suffered attacks on two of its churches, there is speculation that they were targeted because of their support given publicly last month to the anti-drugs campaign undertaken by President Maithripala Sirisena as his pet project. Sri Lanka has become a transit point for the international drug trade, and the president’s campaign has netted vast quantities of drugs and led to the arrest of dozens of drug dealers, most of whom are Muslim. The loss of income and personnel is believed to have precipitated the attacks by drug syndicates linked to IS.

Another popular explanation for the targeting of Sri Lanka is that it was retaliation for the massacre of Muslims in Christchurch, New Zealand, by an Australian gunman just over a month ago. However, an operation of this scale and coordination would require several months of preparation. The establishment of the NTJ began at least eight years ago in 2011. Sri Lanka presented a soft target for IS infiltration due to the relaxation of national security safeguards in recent years.

In its bid to contain the security threat, the government has brought in emergency regulations that give special powers to security forces. Soldiers who have limited training in dealing with civilians are now going into people’s homes in cordon and search operations. There are reports that the military are being tough on Muslims when they enter their homes. This could alienate Muslims and lead more youth to join the ranks of militant organizations. This is a throwback to the three-decade civil war that the Sri Lankan state waged against Tamil rebels when similar search operations led to loudly voiced allegations of human rights violations that further alienated the target populations. 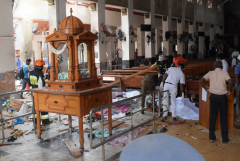 But today, with national security given the highest priority, there will be hardly any objections publicly voiced against the vesting of emergency powers with security forces. Public sentiment is to ensure that the apprehension of terrorists takes place as priority number one. There is much anger among both the Sinhalese and Tamil populations as the Christian victims were from both communities. Threats to Muslim shops and even to individuals are being reported, not in a large-scale way but widespread enough to provide a tipping point into mass violence.

The police are reporting the existence of more suicide bombers and have been finding vehicles parked with bombs inside them. Schools are all closed because they might be targets. There is particular concern for Christian schools due to the targeting of churches in the Easter Sunday bombings. Parcels with bombs are also being found. If another one of them explodes in a crowded area, or in a school, the reaction of people could be unpredictable.

The government failed to heed intelligence reports warning about attacks by Muslim extremists that were given by Indian intelligence. Shocking evidence has surfaced of political leaders failing to cooperate with each other even in the national interest. The prime minister complained that he had not been informed about these warnings. A government minister said he did not go to church on Easter Sunday as he had heard about these reports, but the churches and ordinary citizens were not warned. People are angry about the government’s failure to take pre-emptive action.

In the meantime, the opposition is seizing advantage of the situation by accusing the government of ineptitude and weakness. The Christian population who voted overwhelmingly for the government at the last elections may no longer wish to do so. They feel betrayed and abandoned. The main political beneficiary of this tragedy is likely to be the opposition in a year that is likely to end with presidential elections due in November. In a country where conspiracy theories abound, this is a cause for added speculation.

Jehan Perera, executive director of the National Peace Council of Sri Lanka, is a regular political columnist for newspapers both in Sri Lanka and internationally. He holds a doctor of law degree from Harvard Law School and a BA in economics from Harvard College.