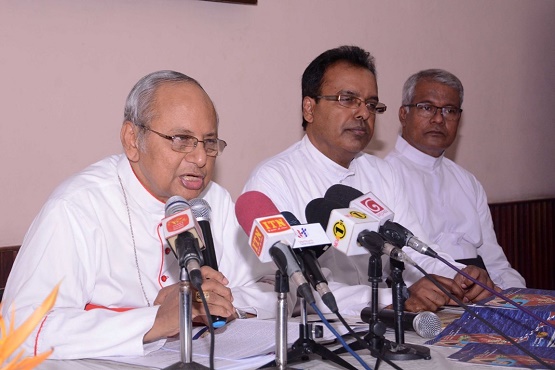 The Sri Lankan bishops have declared 2017 to be the year of St. Joseph Vaz, Sri Lanka's first and only saint.

As part of the celebrations, Archbishop of Colombo Cardinal Malcolm Ranjith said that the Sri Lankan church will promote the life and work of St. Vaz (1651–1711).

"Our aim is to reveal more details of his courageous work to Sri Lanka's Catholics and the world," Cardinal Malcolm Ranjith told reporters as he announced 2017 as the year of the saint.

Cardinal Ranjith said that, this year, special focus will be given to poverty alleviation and increasing harmony among different religions and racial groups, virtues that St. Vaz epitomized.

"St. Joseph Vaz set a tremendous example for reconciliation by learning both Tamil and Sinhalese the two main languages in Sri Lanka. He not only spoke both languages but lived peacefully with people belonging to both ethnic groups," Cardinal Ranjith said. The church has started collecting historical facts about St. Vaz's life and the places he visited under threat of persecution or even death.

The Portuguese introduced Catholicism to Sri Lanka in 1505. However, the Dutch, who took over in 1658, introduced Protestantism and persecuted Catholics. St. Vaz, an Oratorian priest, went around the country reviving the faith in secret.

In a bid to further popularize the Indian-born saint, the church will also organize pilgrimages to Goa, his birthplace.

The church in Sri Lanka laid the foundations for a national shrine dedicated to St. Vaz at Mahagalgamuwa Church in Kurunegala on land gifted by the government.

"The national shrine will be open to people from all religions," Father Piyal Janaka, episcopal vicar of Kurunegala Diocese told ucanews.com.

As part of the celebrations a parish in the capital, Colombo, has already established a soup kitchen to feed poor schoolchildren.

"The soup kitchen was introduced to follow in the footsteps of St. Vaz who lived a simple and humble life and suffered with the poor in this country," said Father Anthony Fernandopulle, secretary of the National St. Joseph Vaz Secretariat.

Father Fernandopulle said that children had free soup in his parish school, St. Thomas College Kotte starting Jan. 16 and that other parishes will follow suit.

St. Vaz  is credited with having revived the Catholic faith in the country, using disguises and learning the local Sinhala and Tamil languages to meet secretly with underground Catholics. He died in 1711.

Born in 1651 and ordained a priest in 1676, he volunteered to serve the priestless Catholic community in Sr Lanka' s coastal areas where the church was proscribed by Calvinist Dutch colonizers.

Starting as a lone missionary in a forbidden land, St. Vaz later won the friendship of the Buddhist king of Kandy from where he ran eight missions serving more than 60 mission stations. He is popularly known as the Apostle of Sri Lanka. He was beatified by Pope John Paul II in Sri Lanka in 1995 and canonized by Pope Francis in 2015, also in Sri Lanka.