Still no inquiry or damages awarded 23 years after the Church of St. Peter and St. Paul was bombed during civil war 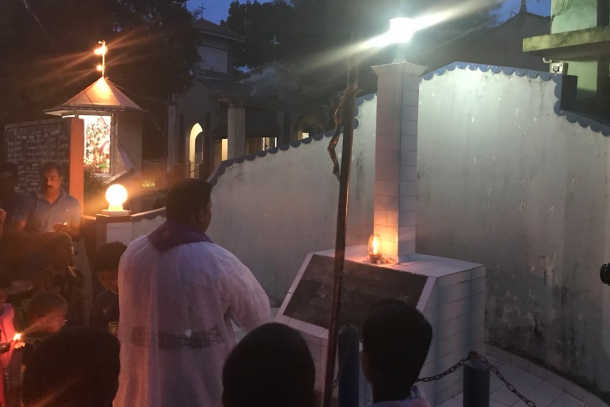 A prayer service is held near a monument built for victims of the 1995 Navaly church bombing in the city of Jaffna on the northern tip of Sri Lanka, in this undated file photo. (Photo by Nishanthan/ucanews.com)

The hurt felt by many survivors and families of those killed in the 1995 bombing of the Church of St. Peter and St. Paul in northern Sri Lanka remains acute. Some 147 people were killed and 400 wounded in the incident that occurred at the height of the island nation's civil war.

Some believe the Air Force bombed the property in the village of Navaly as part of a broader campaign to retake the Jaffna peninsula from the Liberation Tigers of Tamil Eelam (LTTE), who had a stronghold in the region.

The episode is considered one of the low points of the decades-long conflict between Sri Lanka's army and the separatist guerrillas seeking an independent homeland for the Tamil minority.

The slain included many women and children who had mistakenly assumed the church would be held as sacrosanct by both sides midway through the 1983-2009 conflict.

But that wasn't the case.

Navaly resident Anthony Croose Kamala, 67, can still recall the day of the attack.

"We heard eight explosions ring out as the helicopters flew past," she said, adding it was unconscionable that over two decades later there hasn't been a transparent inquiry or any damages awarded to the families of the victims.

Early last month, Father Roy Fernandez, the parish priest of the church, which is still standing, organized a Mass to mark the 23rd anniversary of the event.

He said bereaved relatives were devastated not only at losing their loved ones but at being robbed of the chance to perform last rituals or burial ceremonies.

"Hindus and Catholics come here every year with photographs of the ones they lost," he told ucanews.com.

But justice must be served for those who took shelter in the church and Hindu temple nearby that was also strafed by aircraft, said Father S.V.B. Mangalaraja, director of the Commission for Justice and Peace in Jaffna Diocese.

"The government has denied responsibility for the bombing," he said.

"The bishop of Jaffna, Thomas Savundaranayagam, kept raising the issue and bringing it to the attention of Sri Lankan officials and the international community, but nothing has really come of that," he added.

He said the injured and relatives of the Tamils who died must be compensated.

Bishop Savundaranayagam wrote a letter to former president Chandrika Kumarathunga on July 10, 1995 lamenting the killing of civilians who were ordered by the Defense Ministry to gather at the church.

In the letter, he urged the government to refrain from conducting aerial bombing and artillery attacks on civilians who take shelter in churches, temples and schools.

The International Red Cross also released a report on the "Navaly massacre" on July 11, 1995 asking the president to respect civilian lives, properties and places of refuge.

It cited eyewitness reports claiming the church and adjacent buildings had been targeted by an Air Force strike at 4.30pm on July 9.

The bombing of the church and Sri Kathirgamar Murugan Hindu Temple resulted in devastating carnage, with many babies pulled from the rubble later by rescue squads to no avail.

Many of those who survived remain traumatized by the incident.

They claim on the day of the attack the Air Force had distributed leaflets asking civilians to move to religious venues and avoid areas that could be strafed.

It was not clear whether the attack was part of a calculated strategy by the military or a foul-up that has never been admitted to.

Kamala, who remains haunted by what happened, said villagers had been welcoming refugees and providing them with daily necessities before the bombing took place.

Many came barefoot, having fled their homes to escape the fighting, said the elderly lady, a member of the Society of St. Vincent de Paul, a Catholic voluntary organization.

"We gave them milk, dry rations and clothes but unfortunately many of them died the same day they arrived because they thought the church would be safe," she said.

"I remember hearing the bombs go off while I was scraping out raw coconut meat to make food for those who'd gone to the church," she said.

She rushed to the building through a haze of smoke and arrived upon a nightmarish scene of scattered body parts and singed flesh.

Hundreds were crying, praying with rosary beads, making the sign of the cross and wailing in anguish, she said.

While Kamala, who was in her early 40s, was tending to some of the victims, a fellow villager ran over and said her only daughter had died.

This wasn't an isolated incident.

In 1999, the Shrine of Our Lady of Madhu, a Marian shrine and popular pilgrimage site on the Jaffna peninsula, also came under attack

Refugees are known to have used the church and 400-year-old edifice, considered the holiest Catholic shrine in the country, as a place of shelter on several occasions during the war.

But fate was against them on Nov. 20 when the property was shelled and 40 Tamils including 13 children who had been displaced by the fighting lost their lives. Another 60 were injured.

Both sides blamed each other.

President Kumaratunga claimed the LTTE had mortar bombed the church while the "separatists" countered the army was to blame.

Kerala said no compensation was awarded but the Army later helped to renovate the shrine.

Astika Anthonypillai was 10 when it happened. She survived but her cousin didn't.

"She died on the spot," she said. "I was just lucky. My aunt came to rescue me."

"I was too scared to go back there for years after that."