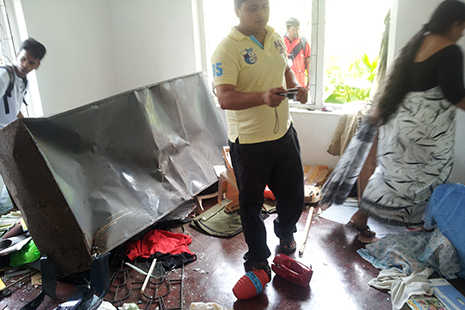 People look at damage in the Calvary Free Church in Hikkaduwa after a mob including 20 Buddhist monks attacked it earlier this month.

Christians rallied in Colombo yesterday to protest against recent attacks on churches and mosques, and called on the Sri Lankan government to guarantee religious freedom for all minority religious communities in the country.

“We plead for the freedoms enshrined in the constitution. The freedom of thought, conscience, religion and association should be available to all religious communities,” said Anglican Bishop Dhiloraj R. Canagasabey of the Church of Ceylon, who addressed a gathering of more than 2,000 at the Cathedral of Christ the Living Savior in the capital yesterday.

“We expect the rule of law to be upheld and worry about hate speech and hate mongering against non-majority faith communities,” he said.

“Christian communities face hardships in educating children in accordance with the tenants of their faith. Many children are compelled to study the majority [Buddhist] religion, a clear violation of our religious rights.”

Last year there were numerous reported attacks by radical Buddhist groups on Christian places of worship, mosques, Hindu temples and even on Buddhists who spoke out against growing religious intolerance in the country.

Mobs led by radical Buddhist monks also attacked the Assemblies of God Church and Calvary Free Church during Sunday worship services on January 12 in the coastal town of Hikkaduwa.

“A mob of over 200 men and women including 20 Buddhist monks entered the church while we were worshipping in the morning and damaged the building and destroyed equipment,” said Pastor Perumal of the Calvary Free Church.

“Bibles and hymn books were burnt. The group threw stones at the church and damaged the building. Police were unable to control the mob and asked us to leave the church immediately,” he said, adding that damages had amounted to about US$6,400.

Akmeemana Dayaratna Thero, a Buddhist monk and leader of Sinhala Ravaya, a Buddhist extremist group, said that members of evangelical movements had harmed religious harmony in Sri Lanka by converting Buddhists to Christianity.

“They have established prayer centers in majority Buddhist areas and encourage Buddhists to join with them,” said Thero. “The government should not allow any foreign religious missions into the country.”

The government needs to introduce new laws and regulations to prevent the conversion of Buddhists to other religions, he added.

An anti-conversion bill was first presented in parliament in 2005. Christian leaders and evangelical pastors have campaigned against it. The bill is currently pending in parliament.

“We arrest the culprits who are guilty of attacking religious places and punish them according to the law,” he said.