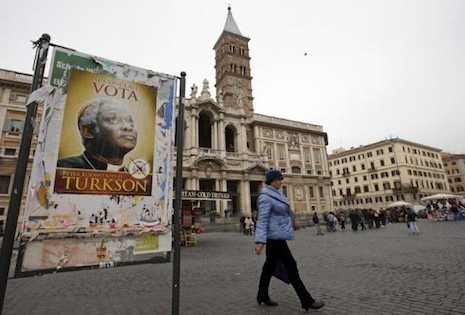 Spoof  “vote for Turkson” posters have popped up in Rome along walls still plastered with campaign posters from Italy’s general election on Sunday and Monday. Campaigning for the papacy is officially forbidden and even suggesting one is a candidate is usually enough to end any cardinal’s chances of ascending to the throne of Saint Peter.

Ghana’s Cardinal Peter Turkson is the Irish bookmakers’ favorite to replace Pope Benedict, putting a non-European in pole position to lead the 1.2 billion-member Roman Catholic Church for the first time in more than a millennium.

Irish bookmaker Paddy Power offered odds of 11/4 against for Turkson, meaning successful punters would win 11 pounds for every four staked, while Britain’s second largest bookmaker Ladbrokes offered odds of 5/2 against.

Turkson would be the first non-European to lead the Catholic church in more than a millennium if he is chosen to succeed Benedict. Italian Angelo Scola is second favorite according to Paddy Power at 3/1 against.

“Pope Benedict quitting leaves a tall hat to fill – let’s just hope God gives him a good reference for his next job,” a Paddy Power spokesperson said in a statement. “As for the betting, the real action kicks off now.”

The new pope will inherit a Church scarred by Vatileaks and by child abuse scandals in Europe and the United States, both of which may have weighed on Benedict’s decision to decide he was too old and weak to continue the papacy.

The pope has two days left before he takes the historic step of becoming the first pontiff in some six centuries to step down instead of ruling for life.

Betting on the new pope earlier in February had ranked Nigeria’s Cardinal Francis Arinze and Canadian Marc Ouellet alongside Turkson in a three ‘cardinal’ race.

Some 115 cardinals will enter a closed-door conclave at the Vatican in March.

“While Turkson and Scola are currently out in front, let us not forget those fabled words ‘he who enters the conclave as Pope, leaves it as a Cardinal’,” the Paddy Power spokesman said.

Paddy Power said Turkson has attracted the highest number of bets, accounting for 15 percent of the market and is shouldering the biggest single bet of 5,000 pounds ($7,600).

The head of the Vatican’s justice and peace department, the Ghanaian has been tipped as Africa’s frontrunner in a contest heavy with speculation that a Latin American or African could be elected as chief of the 1.2 billion-strong Catholic population.

While Canada’s Ouellet is still in the running at 7/1 according to Ladbrokes, Arinze’s standing at both bookmakers has sunk to 25/1.

Paddy Power said that betting on who will be elected as the new pope is set to become the largest non-sporting market in its history. It said it had taken 300,000 pounds on “pope betting”.