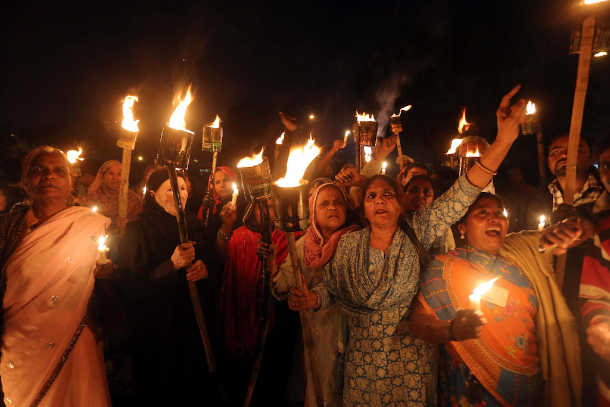 Survivors of the 1984 Bhopal gas tragedy participate in a candlelight vigil in December 2013 to pay homage to people killed in the disaster. Activists are seeking special protection for them from Covid-19 infections. (Photo: STR/AFP)

Thousands of people who survived the 1984 disaster continue to live in the central Indian city and have weak immunity as a result of the tragedy.

Some 500,000 people, including survivors, their children and grandchildren, continue to suffer physical weakness, deformities, diseases and low immunity, activists say.

“Five of them have already died from Covid-19 infections, but still there is no arrangement for screening and treatment of these unfortunate people,” said Rachna Dhingra, an activist working for the survivors. She said they are “physically fragile and so easily susceptible to Covid-19 infections.”

The government of Madhya Pradesh state, whose capital Bhopal is, must take “immediate steps” to assign hospitals and facilities testing and treatment for gas survivors and their family members.

“The government failure will spell a catastrophe,” Dhingra told UCA News on April 16.

The Bhopal gas disaster, described as the world’s worst industrial tragedy, occurred when some 40 tons of highly toxic methyl isocyanate leaked out from the Union Carbide Corporation factory on Dec. 2-3 night in 1984 on the outskirts of Bhopal.

It instantly killed more than 3,000 people and thousands more on successive days. Activists claim many people still die of its side-effects following the state's failure to clean up the now-defunct factory and its premises.

“The water, environment and the soil in and around the factory continue to spew out pollution, further endangering the lives of the survivors and their family members,” said activist Rashida Bee, who works with children of survivors with physical infirmities.

Bhopal has reported 168 cases and activists fear the number could quickly rise if authorities fail to act.

Activists working for the survivors have written to the federal health minister and state officials appealing for protection of the gas survivors and their families.

“A little over half a million people of Bhopal, who continue to suffer consequences of the disaster, are much more vulnerable to contracting Covid-19 in comparison to the general population,” their letter said.

The toxic exposure has damaged the immune systems of many gas-affected people, said the letter. It sought testing and critical care for such people.

Some 50 percent of gas-affected people suffer from cardiovascular problems, while 60 percent have pulmonary problems, the letter said, quoting government data. At least 15.6 percent are diabetics, while 10,550 are cancer patients.

“The government data itself is clear proof of how vulnerable are these gas survivors to the deadly viral disease,” said Dhingra.

The priest told UCA News that more than half a million people live in the vicinity of the tragedy-hit factory. “They live close to each other in a slum-like situation. If the virus spreads there, it will be another disaster like the gas tragedy,” he said.

He said Bhopal Archdiocese “is ready to cooperate with the government. We can offer our services and institutions such as schools and hospitals to be used for the people in this crucial war against the pandemic,” he said.

Archbishop Leo Cornelio of Bhopal has already written to state Chief Minister Shivraj Singh Chouhan extending the Church’s support to the government in “this fight against the deadly virus,” he said.