Despite recent elections, the country remains a perilous place for those who oppose the conservative elite

A Thai policeman inspects the belongings of a driver at a road checkpoint in Muang, Nakhon Phanom province. (Photo by Aidan Jones/AFP)

Sirawith Seritiwat did not take well to the military coup that unseated a democratically elected government in May 2014 after months of raucous street protests in Bangkok against Yingluck Shinawatra, then Thailand’s prime minister.

A group of army generals seized power to restore “peace and order,” as they put it, but the young pro-democracy activist would have none of it.

Defying the military’s order against any dissent and political activity, Sirawith, who is popularly known by his nickname “Ja New,” would regularly appear at crowded spots in downtown Bangkok.

Holding small handmade signs with pro-democracy messages, he would call on the army to return power to the people. Within minutes he would be surrounded by sympathetic passersby before being rushed away by plainclothes officers.

But then a few weeks later he would be back despite repeated threats against him on social media and constant surveillance of his activities by authorities.

The 27-year-old activist is still at it.

After nationwide elections held in March, junta leader Prayut Chan-o-cha has returned for another term. He did so thanks to a plurality of votes he received, in an idiosyncratic new constitutional arrangement for electing a prime minister, from members of parliament and the Senate. The former were elected while the latter were handpicked by Thailand’s powerful military.

Observers have widely dismissed the latest elections as a sham because of numerous irregularities as well as questionable decisions in the junta’s favor by the Election Commission and various courts.

Sirawith called on the appointed lawmakers in the Senate not to endorse Prayut. His pleas fell on deaf ears, however. The 250 members of the Upper House unanimously voted for the former army chief. 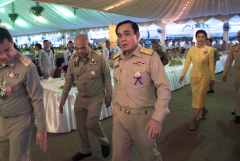 Yet the outspoken activist’s continued opposition to the military clearly has not gone unnoticed. On the night of June 2, Sirawith was set upon by a group of five men who wore motorcycle helmets and wielded sticks. The attack took place at around 10 p.m. in full view of pedestrians on a busy street.

The activist suffered bumps and bruises to his face and head. He showed some of his injuries off on Facebook while he livestreamed himself filing a police report and seeking help at a hospital.

He said that based on the ferocity of the attack, which was stopped only when pedestrians came to his aid, his attackers were out to cause him serious harm and possibly murder him. “I will never forgive them,” he wrote on his Facebook page. “I did not think they would be so vicious.”

Sirawith’s attackers remain unknown and at large. Anti-junta activists suspect they were hired thugs or even plainclothes officers. The military denies this claim and promised to investigate.

Sirawith is hardly the first or only political dissenter who has been attacked physically over their opposition to anti-democratic forces in Thailand.

In separate attacks in April and May, assailants who wore motorcycle helmets to hide their identity injured two prominent pro-democracy campaigners, Anurak Jeantawanich and Ekachai Hongkangwan, in Bangkok.

Ekachai, an outspoken activist, has been assaulted repeatedly over the years and had his parked car torched for the second time in April. No assailant has ever been apprehended or even identified by the authorities.

“The failure of Thai authorities to seriously investigate these assaults both encourages future attacks and suggests a possible role by officials.”

In late May Gen. Prawit Wongsuwan, who served as deputy prime minister in the military government, dismissed such accusations. “The police are doing their job properly,” Prawit told the media during an interview. “They [Anurak and Ekachai] should ask themselves why someone would want to hurt them.”

The intimidation of vocal political activists can also extend to their relatives. In 2015 Sirawith’s mother, Patnaree Chankij, 43, was arrested on a charge of royal defamation, which carries a 15-year prison term in Thailand.

A single mother who made ends meet as a cleaner, Patnaree was accused of defaming the country’s venerated royal family. She allegedly did so by sending a simple one-worded response (the word “ja” or “OK” in Thai) to another person who had reportedly expressed anti-monarchy sentiments in a private message on Facebook.

International rights organizations condemned the arrest of Patnaree, who was freed on bail. Numerous observers argued that the woman was being harassed by authorities in a bid to silence her outspoken son and to warn other pro-democracy activists of the consequences of dissent.

“Sirawith has been a thorn in the military junta’s side for some time, and the junta is keen to shut him up and send a message to all activists who dare oppose the military junta,” read a blog by Thai Political Prisoners, an anonymously published website that campaigns for victims of rights abuses and political prisoners in Thailand.

“The very nasty threat is: oppose us and we will come after you and your family,” it added.

This is no mere hyperbole. Thailand was once touted as Southeast Asia’s leading light of liberalization and democracy. Yet creeping authoritarianism by the powerful military and allied conservative forces has eroded hard-won rights and civil liberties for most Thais.

Several outspoken critics of the ruling elite have recently ended up dead.

One night last December, for instance, Surachai Danwattananusorn, 78, a prominent political dissident, and two of his fellow activists vanished from their jungle hideout in neighboring Laos, where they had fled after the 2014 coup.

A prominent communist and a one-time leader of the pro-democracy red-shirt movement, Surachai spent time in prison for criticizing the monarchy. He was freed in 2013, just before an impending military takeover of the country, whereupon he fled in fear of his life.

Two weeks after the three men’s disappearance, Thai fishermen discovered two badly decomposed corpses that had washed up ashore on the Thai side of the Mekong River, which forms a natural boundary between Laos and Thailand. Autopsies revealed the two bodies to have belonged to Surachai’s fellow activists.

They had been tortured, murdered and disemboweled. Their remains had been stuffed with concrete and wrapped tightly in bags before being dumped into the Mekong. Surachai has yet to be found, but it is highly likely that he, too, was murdered.

His supporters believe he and his comrades were hunted down and killed by specially trained assassins dispatched from Thailand because of their vocal criticisms of the Thai military and monarchy.

Several other Thai political dissidents who went to ground or sought refuge in neighboring countries have likewise disappeared without a trace and are feared dead.

“Critics, dissenters, activists — they are routinely harassed, attacked, jailed and even murdered around this region. Thailand is no different,” a rights expert who works for the United Nations in Bangkok told ucanews.com. He spoke on condition of anonymity as he was not authorized to speak to the media.

“But there has been a pronounced backsliding in Thailand since the coup,” he added. “Speaking out [against the powerful] can come with considerable risks.”

In its latest annual report, Freedom House, a U.S.-based NGO, has ranked Thailand as “not free.” It also did so in previous years. Despite the recently held elections, the country’s citizens still enjoy only limited political rights and civil liberties, according to the NGO.

Yet dissent is brewing, especially among younger Thais. The median age in this country of nearly 70 million is below 38 years and more than 30 percent of Thais are under 25.

The Future Forward Party, which was founded last year by a group of liberal-minded, forward-looking young political activists, did exceedingly well at the polls in March. The party, which is fronted by a charismatic 40-year-old businessman, got 6.3 million votes and proved especially popular with younger voters.

A generational rift is playing out even at such bastions of traditionalism as Chulalongkorn University in Bangkok. One of Thailand’s elite educational institutions, Chulalongkorn has long been known for being an ideological stronghold of entrenched political conservatism.

Many of the university’s senior administrators and faculty members have openly expressed support for anti-democratic politics, including the rowdy street rallies against the last democratically elected government. The protests precipitated the military coup of 2014, which ushered in severe repression of basic liberties like freedom of speech and assembly.

Yet many of the current students at the university do not share the anti-democratic sentiments commonly espoused by faculty members.

“There is a clear generational divide between the students who want political change and many professors who are very conservative,” a Thai historian who works as a lecturer at the university told ucanews.com.

“In the past even students tended to be pretty conservative. That’s definitely not the case anymore.”