It's time for the Church to stand up for them 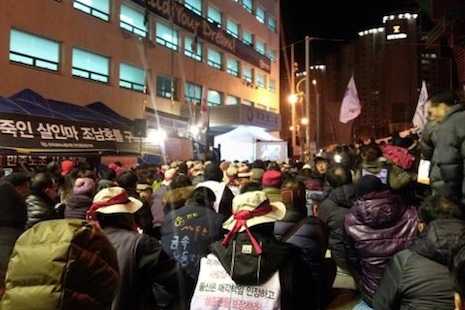 The end of the year has been marked by a tragic series of suicides.

On December 21, two days after Juliana Park Geun-hye was elected president, a union official hanged himself in his office. In his suicide note, he wrote that he felt that his heart was breaking and he could not endure five years under Park.

He also expressed disgust with his employer, Hanjin Heavy Industries, who sued his union for 15.8 billion won (US$14.7 million) after it called a strike.

“In a society where money is the be-all and end-all,” he wrote,  “life is even harder than death.”

One day later, another former unionist threw himself to his death from his 19th floor apartment. Six years ago he started a trade union at his workplace. He and his workmates went on strike and he was badly beaten by the company’s security guards, then fired. Depression had been stalking him ever since.

Finally, on Christmas Day, another labor activist hanged himself. Head of the workers’ union at Hankuk University of Foreign Studies, he too had been fired for leading a strike in 2007, then restored to his post after a court appeal. But the lawsuit crippled him financially.

What pushed these men to the ultimate extreme of taking their own precious lives?

“Their deaths show that the grievances of workers in this country are reaching a climax,” said Father Vincent Jang Dong-hun. “Under the current capitalist system, they are being driven into poverty. This society enjoys prosperity but has no proper social security network for them.

“Moreover, the election result shocked them. They thought they could change their situation if the opposition party won the election, but they were defeated. That’s what made them express their feelings in such an extreme manner.”

The Korean Confederation of Trade Unions (KCTU) shares the belief that the suicides were caused by a sense of hopelessness and an ever more gloomy future. Lay-offs, increasing use of outsourced, irregular workers and the suppression of union activities are all cited as factors.

Talking about the recent deaths, a KCTU official said: “They wanted to change the regime not just for their individual happiness but for the right to work and earn respect. But our hopes have burst like a bubble.”

President-elect Park is the daughter of late president Park Chung-hee. He pioneered the industrialization of Korea, but was savagely repressive. And most of the fruits of that industrialization went to large conglomerates and politicians, not to the workers.

His daughter has promised she will work to accomplish "great unity," extending beyond her core supporters. But this series of suicides seems to suggest that workers simply don't believe her.

In this situation, what can and should our Church do?

The Korean bishops' conference issued a short message of congratulation to Juliana Park, pointing out that South Korea's "rapid industrialization was made possible by the workers." They urged Park to "remember their sacrifice and console a nation that is suffering from division and antagonism."

Meanwhile, the Church carries on with its various activities and ministries, counseling and campaigning to boost the culture and quality of life for people at all levels of society.

But Fr Jang likens these efforts to “calling in a doctor after the patient has already died.” He wants to see a fundamental change in the Church's approach.

“The Church should recognize the garbage that is capitalism, understand that it is devastating society and take the initiative in forming another world view that cherishes the lives of marginalized people,” he said.

I fully agree with him. Our Church is equipped with the weapons to fight against social evils. Its teachings fully endorse the rights of workers over the rush for profits.

The time has come for the Church to make a true stand for the weak and the common people. Christians in this society should have more awareness of the teachings of the Church on social issues – as well as the will to live by them.

John Choi is a journalist based in Seoul