Spanish missionary nun among US women of courage 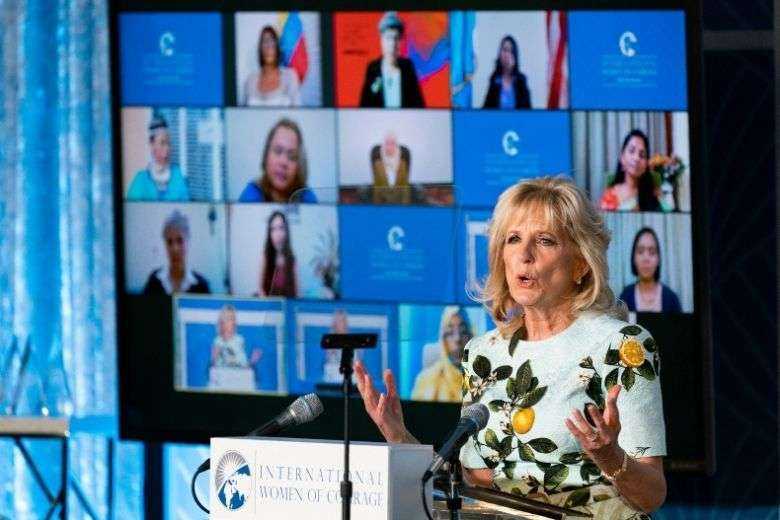 US First Lady Jill Biden speaks at the 2021 International Women of Courage Award virtual ceremony hosted by Secretary of State Antony Blinken at the State Department in Washington DC on March 8. (Photo: AFP)

Comboni Sister Alicia Vacas Moro, a Spanish missionary sister and registered nurse, was one of 14 women to receive this year's International Women of Courage Award, an annual honor from the US Department of State for women who have demonstrated leadership in their human rights work.

The 49-year-old woman religious, who is the Jerusalem-based Middle East provincial superior of the Comboni Sisters, has provided medical care to the poor in Egypt and training to women and children in the West Bank.

Last March, she volunteered to go to Italy to care for elderly sisters from her order where 45 of the convent's 60 residents tested positive for the coronavirus and 10 of the sisters later died.

The women's awards were presented during a virtual ceremony at the State Department on March 8, International Women's Day. Seven women from Afghanistan, who were assassinated in 2020 while serving their communities, were awarded posthumously.

It's easy to think of these women as "mythical heroes or angels among us," said first lady Jill Biden, speaking of all the honorees at the ceremony. "What else could explain such herculean acts of fortitude and fearlessness?"

Among the other honorees were: Maria Kalesnikava, imprisoned in Belarus for fighting for the democratic movement after the country's disputed election; Wang Yu, a Chinese human rights lawyer; Shohreh Bayat and Iranian woman who championed for women's rights after being accused of violating her country's strict Islamic dress code; Ana Rosario Contreras, a Venezuelan labor rights advocate; and Julienne Lusenge, a Congolese human rights activist.

Sister Vacas ran a medical clinic in Egypt for eight years, helping low-income patients before she worked with the Bedouin community in the West Bank, where she set up training programs for women to help them earn money and started a kindergarten program in Bedouin camps. She also assists refugees and asylum-seekers in her role with the Comboni Sisters in the Middle East.

In an online symposium last June called, "Women Religious on the Frontlines," Sister Vacas said the women religious caring for people during the coronavirus pandemic are not superwomen but women with great faith, compassion, generosity and determination.

They are "very vulnerable women, sometimes exhausted, most of the time powerless because they are burdened with the brokenness of their people," she said at the event sponsored by the U.S. and British embassies to the Holy See.

On March 8, the U.S. Embassy to the Holy See hosted a virtual watch party of the Women of Courage awards. In taped remarks announcing Sister Vacas in the virtual ceremony, Patrick Connell, charge d'affaires at the U.S. Embassy until a new ambassador is appointed, said the embassy was proud that she was chosen for the award.

Connell said the woman religious has shown "exceptional courage and leadership" advocating for the marginalized, empowering women and children, helping asylum-seekers and caring for members of her order during the pandemic.

He also said Sister Vacas' "selfless commitment to others" along with her generosity and leadership, is truly inspirational.

The State Department's annual award for women around the world began in 2007 and to date it has recognized more than 155 women from more than 75 countries.