Another Trump term is a recipe for discontent and irreversible change 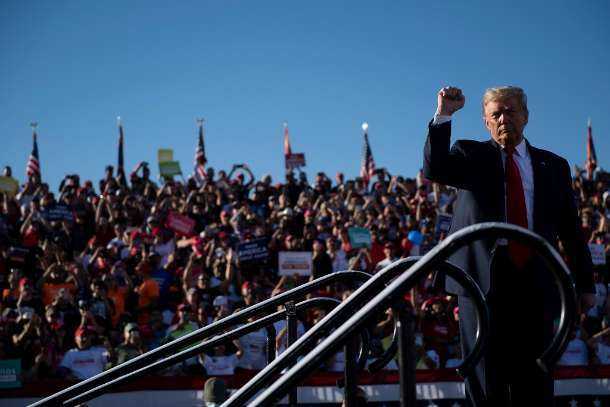 President Donald Trump holds up his fist as he leaves after speaking at a rally at Phoenix Goodyear Airport in Arizona on Oct. 28. His administration has largely ignored Southeast Asia. (Photo: AFP)

Four years of the Trump administration have soured US relations with Southeast Asia, which he largely ignored, dispatching his low-level minions when it suited his trade war with China designed to please his white working-class base.

In pushing his China agenda, Trump also pushed leaders of the 10 nations of the Association of South East Asian Nations (ASEAN) into a corner, forcing them to choose between a US-led alliance in trade and security or Beijing’s ever-expanding reach.

He has also outraged Muslim moderates, abandoned the Trans-Pacific Partnership (TPP) — potentially the world’s largest free trade bloc — and his attitude to the coronavirus has upset regional health officials struggling with the pandemic.

Ou Virak, president of the Future Forum think tank in Cambodia, said should Trump win another four years his agenda would consist of making deals that focused on economic benefits and not security or human rights.

“Trump could manage to cause irreversible change to the rule-based international system,” he said, adding China would continue to be alienated and that would have ramifications for countries like Cambodia which sits increasingly within Beijing’s sphere of influence.

“China will ramp up its influence in the region,” Ou Virak said. “By the end of his term, Cambodia might have already been completely lost. As Trump is proven to be very unpredictable, anything could happen. He might truly, and not just rhetorically, see China as a real threat and military push to block China's rise by escalating conflict in the region. Cambodia could be paying the price.”

The US president also gutted the State Department of hundreds of key positions after assuming power in 2017 while failing to attend ASEAN summits. His political stage in the region was limited to a Singapore photo-op with North Korean leader Kim Jong-un.

“If he wins again, the US will have a tough time commanding respect among Asian countries. His fireball salvos and inconsistent policies against China cannot bring back America’s respected position in ASEAN.”

However, Democrat contender Joe Biden and his running mate Kamala Harris are ahead in the opinion polls heading into election week.

The prospect of a Biden victory has raised speculation he will fill vacant positions in the State Department and join the TPP while re-embarking on the Obama era “pivot” to Asia with the Indo-Pacific strategy as a cornerstone.

That strategy involves countries like Australia and Indonesia — with an exposure to the Indian and Pacific oceans — backed by the US and Japan, and coaxing support from smaller regional countries to ensure control over the sea lines of communication in both oceans.

“A Biden victory could be a good thing for the region,” Ou Virak said. “America will try to rebuild its reputation abroad. It will take a long time and four years won't be enough to repair the damage that has already been done.”

But even under Biden, Kamarulnizam said, the China containment strategy would remain in force with Southeast Asian leaders walking a political tightrope amid a “perceived Cold War divide” and not wanting to antagonize either Washington or Beijing.

“In fact, the region is comfortable working with China despite having long-standing issues over the South China Sea,” he said. “I think Biden could not offer less than what Trump has already offered. Biden needs to re-engage with Asia to regain some respect.”

A Biden victory would also result in the first Catholic president since John F. Kennedy was assassinated in 1963 and only the second in history. He has evoked Pope Francis on the campaign trail and accused Trump of taking the pope’s words out of context for political advantage.

But analysts said religious affiliations would have little influence among the harder heads negotiating trade and tariffs, which will impact directly on the region’s poor.

“If Biden wins the November presidential election, it will generally be seen as positive for the Southeast Asian region,” he said. “There will at least be the hope for a return to more certainty in policymaking and a more multilateral approach to the region.

“Under Biden, the US can be expected to maintain many of Trump’s tough policies regarding China and the South China Sea disputes, which are supported by the majority of Americans, according to the polls. It is also likely that Biden will continue to some extent the US trade war with China.”

That could mean more of the same but under Biden a more coherent and consistent foreign policy towards Southeast Asia backed by a fully staffed State Department would appeal to ASEAN leaders and underpin improved relations going forward.