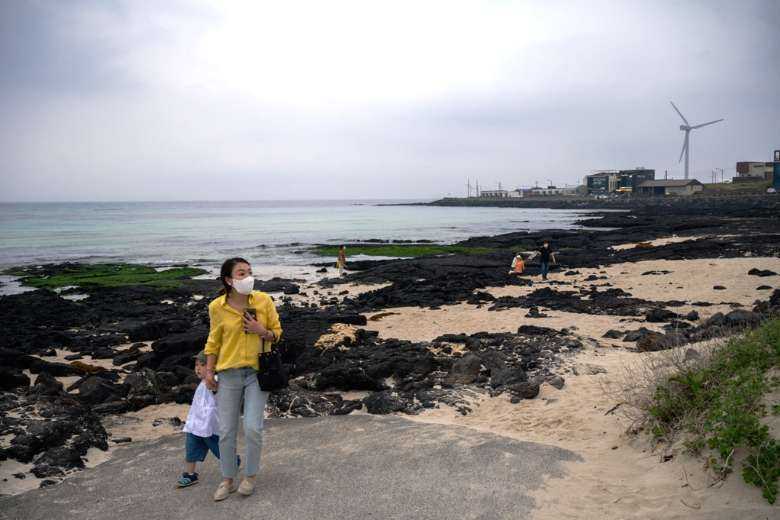 A woman and child walk on Woljeongri Beach on Jeju island in South Korea. The government plans to build 10 new airports across the country including on Jeju and in Saemangeum city. (Photo: AFP)

Catholic officials and environmental activists in South Korea have expressed disappointment over the government’s decision to go ahead with a new international airport in Saemangeum city despite its potential threat to the environment and marine biodiversity.

Saemangeum International Airport in North Jeolla province is one of 10 new airports approved for construction across the East Asian nation at an estimated cost of 8.7 trillion won (US$7.09 billion) in the coming years, Catholic Times of Korea reported on March 13.

The planned airports include a second airport on ecologically critical Jeju island that has been rejected by the Ministry of Environment on three occasions.

Saemangeum city is located on 400 square kilometers of land reclaimed from the sea. The area is home to the world’s longest seawall at 33.9km.

Construction is expected to begin in 2023 and to complete by the end of 2027. It is poised to be commissioned for operation from 2028.

Environmental activists have decried a host of new airports in South Korea, which has adopted a carbon neutrality policy in line with the Paris Climate Change Agreement to cut carbon emissions to the level in the pre-industrial period.

The ecological environment committee of Daejeon Catholic Diocese has held a series of demonstrations since last year to oppose the new airport.

Father Kim Dae-geon, vice-chairman of the committee, led a special Mass in front of the Environment Ministry office in Sejong with hundreds of people to call for suspension of the airport project.

“Let’s pray together for the restoration of this land and all the living beings wounded and dying due to the illogical development,” the priest said.

Analysts have also pointed out the irrationality and lack of financial viability of a new airport in an area where two existing airports have been incurring losses for years.

For example, Muan airport opened in 2007 with a capacity of handling 5.1 million passengers annually, but in 2018 only 320,000 passengers used the airport. It causes a loss of 10 million won annually.

Currently, 10 out of 14 airports in South Korea incur billions of won in losses annually, according to the Korea Airports Corporation.

Since 2019, civil society organizations including environmental groups and religious groups have formed an alliance against the ambitious airport project.

The groups have staged demonstrations against the plan and issued statements, taking a cue from Swedish climate activist Greta Thunberg, who initiated a “flight shame” movement seeking to reduce carbon emissions from the aviation sector globally.

Climate experts fear that the hyped goal of carbon neutrality by 2050 is impossible without curbing the growing demand for civil aviation across the globe.