Two volunteers of South Korean group Myeongrangchon greet each other. The group has been selected for Seoul Archdiocese’s special award for outstanding contributions in preventing suicides and raising awareness of love for life. (Photo: Catholic Times)

Seoul Archdiocese has selected a group for a special award for its outstanding activities and contributions in preventing suicides and raising awareness of love for life.

Its Committee for Life is to confer its 15th Mystery of Life Award on Myeongrangchon, also called Myeongrang Village, a group of residents in Mapo-gu district of Seoul who identify themselves as “a village of people who love life.”

Since its founding in October 2012, the group has been running “Life Safety Net” programs and activities that convey the hope of life by caring for residents and neighbors.

The Mystery of Life Award includes a certificate and cash prize worth 30 million won (US$26,000).

In Myeongrangchon, people widely use five hand greetings whenever they meet anyone anywhere. They include connecting each other with the little finger to say “I promise” and making a heart-shaped sign with hands to pronounce “I love you.” They also shake hands and do high-fives to uplift each other’s spirits.

A series of suicides in Mapo-gu district in the summer of 2012 prompted residents to establish a platform to tackle the growing self-harm tendency among people in the area.

A survey that year found 60 percent of people belonged to high-risk groups who had suicidal thoughts or had actually made plans to commit suicide.

The group started activities from Seongsan Social Welfare Center in October 2012 with a life-loving purpose to train volunteers and activists to participate in suicide prevention and help residents to cope with sufferings caused by successive suicides.

On the ninth day of every month, the volunteers hold a regular meeting to discuss progress and plans. Student suicides in India lead to words of caution 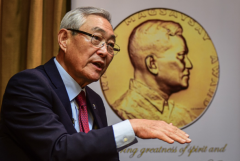 Each autumn, the group organizes a festival for residents that includes walking a life-loving path around the village with love-for life banners and scarfs.

“After the training, I was convinced that suicide can be prevented,” said Park Mi-ja, a volunteer and head of the group. “I felt a great reward when a resident who was suffering from depression told me: I don't take medicine anymore.”

Suicide is a serious problem in South Korea, which has one of world’s highest suicide rates. The scourge has been fueled by stress and depression due to the Covid-19 pandemic, government data shows.

As of Dec. 16, South Korea had recorded 612 deaths from Covid-19. Roughly twice that number of people committed suicide each month between January and September.

The suicide rate is particularly high among young South Korean women in their late teens and 20s, with some 1,924 deaths from this age group in the first six months of 2020.