While no one has been executed there since 1997, capital punishment remains in the codes of criminal law South Korean participants of World Day Against the Death Penalty event held at the National Assembly Oct.10. (Photo by The Catholic Times)

Catholic Church leaders in South Korea have asked the country's parliament to legally abolish capital punishment as part of commemorations for World Day Against the Death Penalty.

Such sentiments were put forward at an event attended by religious leaders, rights activists and politicians at the National Assembly Oct. 10.

Co-organized by Korean bishops' Committee for Justice and Peace and lawmaker Fidelis Lee Sang-min of the ruling Minjoo Party, the event commemorated the World Day Against the Death Penalty and the 20 years of moratorium on death penalty executions in South Korea.

Among those attending the event were Bishop Lazzaro You Heung-sik of Daejeon, president of the CBCK committee.

"Today's event is a stepping stone for South Korea to make its journey from moratorium of death sentence to its legal abolition," said Bishop You. "Only when the value of human life is respected, the cruelty of humanity can be cured," he said.

"Now it's time for the National Assembly to answer our calls by presenting a bill to abolish it and passing it."

At the event, National Assembly speaker Chung Sye-kyun said: "Some say we should maintain the capital punishment to counterpart the ever-ferocious crimes in our society."

He said that the National Assembly will try its best to abolish it in the process of constitution revision and bill deliberation.

South Korea has not carried out an execution since Dec. 30, 1997. South Korea is considered a de facto abolitionist country, but it still has capital punishment in codes of criminal law.

There are 61 people currently on death row in the country. 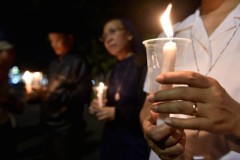