Seoul Archdiocese in South Korea has expanded its charitable services for the vulnerable homeless community to offer free health care in addition to free meals.

The clinic is a joint collaboration between the archdiocese and the One Body One Spirit (OBOS) movement, a faith-based organization that believes in hope, life and love. Inspired by the 44th International Eucharistic Congress in Seoul in 1989 and Catholic social teaching, it works to make a peaceful world according to the spirit of the Eucharistic sacrament.

In January, Myeongdong Babjib was launched as a joint venture with OBOS to provide free packed lunches to some 1,400 people every Wednesday, Friday and Sunday with support from the Energy and Chemicals Division of SK Group, a leading conglomerate in South Korea.

The free health clinic is staffed and run by volunteers who are doctors, nurses, medical students and lay Catholics from the Lay Apostolate Society of South Korea.

Cardinal Andrew Yeom Soo-jung, archbishop of Seoul, blessed the clinic at its launch.

“Let us welcome and embrace our homeless neighbors as the angels of the Lord. I deeply thank each and every one of you for devoting your time and effort to this amazing work. I sincerely ask of the Lord to come into your lives and offer you special grace,” Cardinal Yeom said.

The idea of the homeless clinic came into being as many hospitals designated to serve homeless people are no longer able to provide medical care due to the pandemic, according to a press release from Seoul Archdiocese.

The clinic draws inspiration and support from the Raphael Nanum Foundation, a medical charity that has been pursuing its goal to relieve the needs of medically underserved populations, both domestically and internationally, providing free medical checkups and assistance to immigrant workers and developing countries. 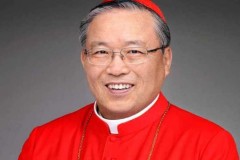 On every Sunday, volunteer doctors are available for checkups and to prescribe medication to homeless patients. They also help those with urgent health needs to be transferred directly to an emergency medical center.

On the first day, the clinic had 13 visitors and it soon increased to 80 patients per day.

Teresa Curie Ahn, director of the board of Raphael Nanum Foundation, said its mission to support the socially excluded group will continue.

“We will do our best to continue improving the health status of socially excluded groups by reaching out to them,” she said.

Despite South Korea being an economic powerhouse, about 16.7 percent of its people live below the poverty line, according to a report from the France-based Organization for Economic Cooperation and Development. Based on 2019 data, the organization ranked South Korea fifth among 33 developed nations for relative income poverty.