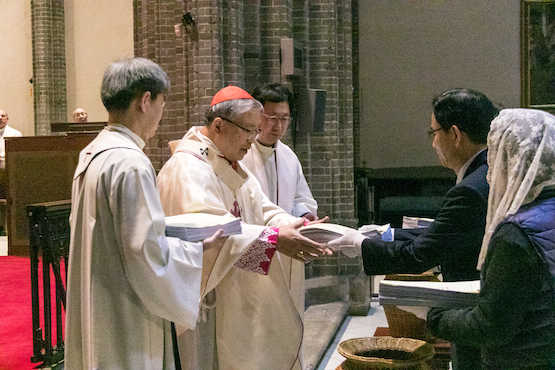 Cardinal Andrew Yeom Soo-jung of Seoul receives an anti-abortion petition with over 1 million signatures at the 2018 Mass for Family and Life at Myeongdong Cathedral in Seoul on Feb. 12. (Photo by Catholic Times of Korea)

The Catholic Church in South Korea has gathered over a million names on a petition to keep the country's anti-abortion law in place.

As South Korea continues to modernize and with the number of single mothers on the rise, calls to decriminalize abortion have increased from sectors of society, something opposed by the church.

"The signature-gathering campaign was [conducted] voluntarily and it served as an opportunity to spread the teachings of the church," said Father Remigius Lee Dong-ik, secretary of the Committee for Bioethics of the Catholic Bishops' Conference of Korea (CBCK).

The CBCK held a special Mass at Myeongdong Cathedral in Seoul on Feb. 12 and presented the petition of 1,005,000 signatures. It launched the campaign on Dec. 3.

"[This] shows how desperate the church is to fulfill its mission of protecting all forms of life," said Cardinal Andrew Yeom Soo-jung, who celebrated the Mass.

He called the speed with which so many signatures were added, "an appeal to society" and said, "even a fetus is a reflection of God, a citizen of our society, and a human life that should be respected."

The CBCK will implement the second phase of its campaign until March 18 to raise awareness of the danger of consenting to a "culture of death" across South Korean society, it said.

"I hope the campaign is used as a tool to spread the idea that we must respect life," said Archbishop Hyginus Kim Hee-joong of Kwangju, the current CBCK president.