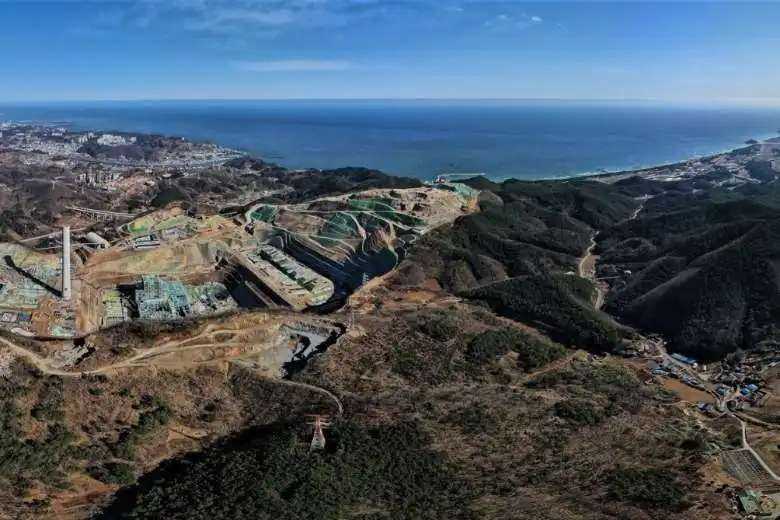 An aerial view of the 2.1-gigawatt coal power plant being constructed in Samcheok city in Gangwon province of South Korea. (Photo: www.forourclimate.org)

Hundreds of Catholics marched on the streets of South Korea this week demanding their government change its policies on nuclear energy and reduce the use of fossil fuels to help tackle the increasing climate crisis.

The walking pilgrimage in Chuncheon Diocese on May 25 was part of a series of programs organized by Catholic dioceses for the May 22-29 observance of Laudato Si', the landmark 2015 encyclical of Pope Francis that stressed action for environmental protection.

The rally called on the South Korean government to phase out its nuclear power plants and to stop construction of coal-fired power plants to end the use of fossil fuels. Participants said the government’s anti-environment policies are adding to the global climate crisis.

The discussions brought out the unanimous opinion to reduce the use of fossil fuels. In South Korea, coal and oil account for about 82.5 percent of energy consumption, according to Energy Tracker Asia.

However, the government has initiated an energy transition plan that aims to take the share of renewable energy resources for electricity to 35 percent by 2040. The plan faces roadblocks because policies keep on changing.

Catholic activists said getting rid of nuclear and coal power while introducing renewable energy are huge challenges for the government, but these need to be done to protect the environment and curb climate change

Yet South Korea remains one of the biggest carbon polluters, coal importers and the second-largest overseas coal financier, ETA says.

Air pollution in industry-intensive large cities like Seoul is a major concern in South Korea. Last year the East Asian nation became the 14th country to pass a carbon neutrality law with an ambitious plan to achieve carbon neutrality by 2050.

On the other hand, the government faced criticism for moving ahead with a coal power plant in the beach city of Samcheok in Gangwon province.

Catholic and civil society groups have been calling on the government to implement its policy of a gradual nuclear phase-out by closing all nuclear power plants and to introduce renewable energy like solar power and wind power.

Catholic activists said getting rid of nuclear and coal power while introducing renewable energy are huge challenges for the government, but these need to be done to protect the environment and curb climate change.

To stress the importance of environmental protection, the Archdiocese of Seoul organized an online prayer meeting on May 26. The next day the environment ministry of Daejeon Diocese and churches in Cheonan and Jeju island held a march for climate action.