South Korea to build 'chapel of peace' in Panmunjom on DMZ 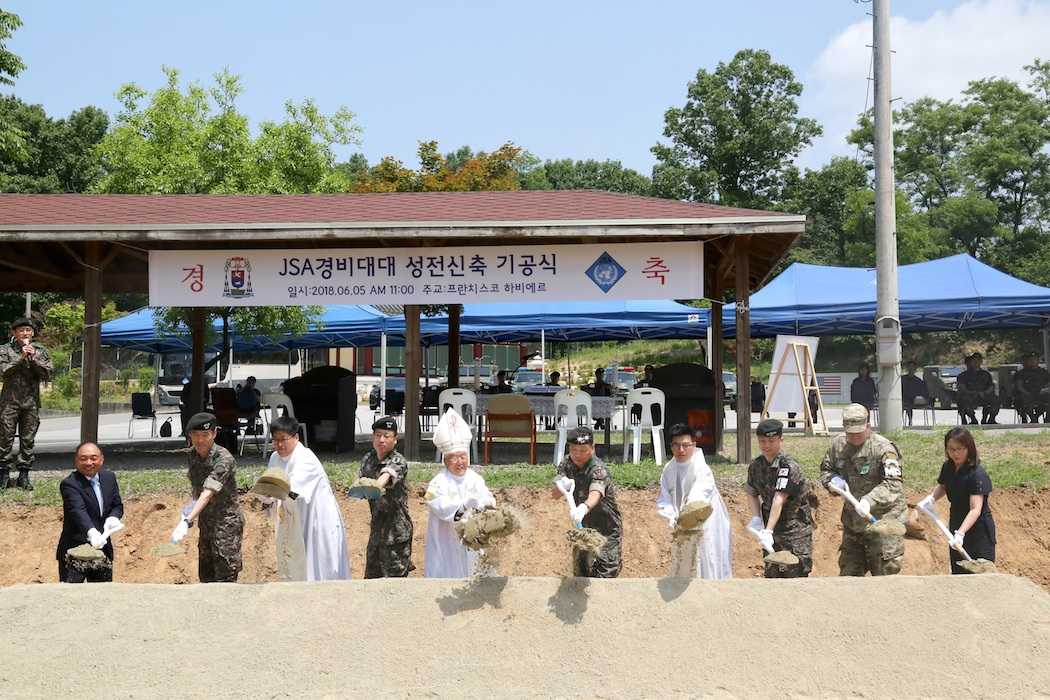 Francis Xavier Yu Soo-il, the Bishop of Military Ordinariate in Korea (fifth from left), participates in a groundbreaking ceremony for the new Joint Security Area (JSA) chapel in Panmunjom on the inter-Korean border on June 5.

A new chapel will be built in the Joint Security Area (JSA) at Panmunjom, a truce village on the inter-Korean Demilitarized Zone (DMZ) that was established at the end of the (1950-53) Korean War.

On June 5 a groundbreaking ceremony was held for the new chapel presided over by Bishop Francis Xavier Yu Soo-il.

The chapel will replace an older structure built in 1958 three years after the peace talks at Panmunjom resulted in a ceasefire.

The facility, which will be placed in front of the JSA Visitor Center, will act as a "chapel of peace" in this historic setting where the scars of the war remain despite the latest wave of momentum for reconciliation and increased inter-Korean exchanges.

"The construction of the new chapel in the JSA is a gift showing God's grace," Bishop Xavier said.

"The chapel, located in the closest possible place to North Korea, will serve as somewhere we can pray to overcome the division of the two Koreas as we hope for peaceful reunification," he added.

"It will also serve as a spiritual cradle for the soldiers guarding the truce village. A blessing on all those who visit here."

The one-storey building situated on a 2,089-square-meter plot of land is due to be finished by March with capacity to accommodate over 100 churchgoers.

"It is meaningful that we can build a new chapel in the JSA, which was the place of fierce battles and has now become a place of dialogue. This will be a venue to pray for peace on the Korean Peninsula," said Lt. Col. Matthew Farmer, commander of the U.N. Command Security Battalion-JSA.