A guard wearing a face mask takes part in a 'changing of the guard' ceremony for tourists at the main gate of Deoksugung Palace in Seoul on Nov. 18. (Photo: Jung Yeon-je/AFP)

South Korea has tightened social distancing norms in Seoul and its surrounding areas, banning gatherings of more than 100 people even for religious services amid threats of a nationwide spread of the Covid-19 pandemic.

The country reported 313 new coronavirus cases on Nov. 18, its highest number since August. The stricter social distancing measures aim to blunt a spike in cases.

"We are in a crisis where there are pessimistic views that predict another nationwide transmission," Deputy Health Minister Kang Do-tae told a meeting.

"Infections are now occurring simultaneously in every corner of our society, real-life situations, unlike the past when there were large outbreaks from a specific place or group."

About half of South Korea's population live in and around capital Seoul.

Under the new norms, gatherings of more than 100 people are banned. Religious services and sporting events can house only 30 percent of their capacity.

The government also plans to curtail public transport if the pandemic situation does not improve over the next two weeks.

Only two-thirds of students will be permitted in school classrooms, while clubs and karaoke bars will have to ensure more space between patrons.

South Korea had done aggressive tracing and testing to bring the virus under control. The recent spikes in cases were reported in workplaces, small gatherings and church services. 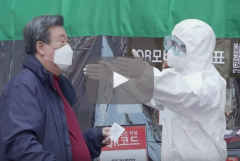 More than 200 new cases have been reported every day over the past four days.

"Our anti-coronavirus efforts are facing a crisis, and the situation is particularly serious in the Seoul metropolitan area," Prime Minister Chung Sye-kyun told a meeting of government officials.

Social distancing has been increased by one notch to Level 1.5 in Seoul and the surrounding Gyeonggi province, where average daily cases were above 100 in the previous week.

The maximum capacity at nightclubs, indoor concert halls, restaurants and cafes is set at one person per 4 square meters.

Companies and rally organizers can face fines of up to 3 million won (US$2,700) if they fail to comply with health norms, while a maximum fine of 100,000 won will be slapped on people for not wearing masks in public places.

The Archdiocese of Seoul had suspended all public Masses on March 18 in compliance with the government's social distancing policy but it resumed services on April 26 while following restrictions.

The archdiocese has launched a video campaign called “The Lord is with You” to help priests communicate with church members and hold Masses without the faithful's physical presence.