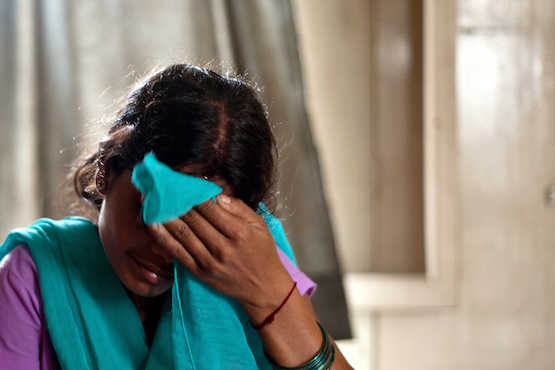 An alleged Indian human-trafficking victim sits at a police station after being rescued from a village in Karnal around 100 kilometers from New Delhi. (Photo by Manan Vatsyayana/AFP)

South Asian nations continue to fall short in attempts to combat human trafficking and protect victims but are making "significant efforts," according to the U.S. State Department's Trafficking in Persons Report 2017.

Myanmar improved slightly from Tier 3 in 2016 to the Tier 2 Watch List of nations that require special scrutiny.

U.S. Secretary of State Rex Tillerson said today's global figure of some 20 million victims of human trafficking illustrates there is still much work to be done.

"Regrettably, our challenge is enormous. Human trafficking is becoming more nuanced and more difficult to identify. Much of these activities are going underground, and they're going online," Tillerson said.

The report defines Tier 2 countries as not fully meeting "the minimum standards" of the Trafficking Victims Protection Act but making "significant efforts" to ensure their activities against human trafficking meet the standards.

During the reporting period, Afghanistan, Nepal and Pakistan increased the number of investigations and prosecutions of traffickers, while Sri Lanka made a significant increase in its prosecutions. The respective numbers for Bangladesh, however, decreased.

The report recognizes both India and Bhutan for their improved performance on the identification of victims but says they did not necessarily provide adequate protection services during the reporting period.

The government of war-torn Afghanistan "demonstrated increasing efforts by enacting a new law on human trafficking in January 2017 that attempts to reduce conflation of smuggling and trafficking, and criminalizes bacha baazi, a practice in which men exploit boys for social and sexual entertainment," the report said.

The government investigated, prosecuted and convicted traffickers, including through the arrest and punishment of complicit officials for bacha baazi.

The government also opened 15 child protection units that prevented the recruitment of more than 300 children into the security forces in 2016.

However, official complicity remains a serious problem, especially in the sexual exploitation and recruitment of children by Afghan security forces, the report says.

Efforts to tackle human trafficking in Bangladesh have worsened since the last report.

The report notes the country has finalized and adopted the implementing rules for the 2012 Prevention and Suppression of Human Trafficking Act and drafted an implementation roadmap for the 2015-2017 national action plan.

However, while Bangladesh has demonstrated significant efforts to tackle the issue during the previous reporting period, the government's investigations, prosecutions and convictions of trafficking crimes decreased during the most recent reporting period. A Bangladeshi child stands beside an anti-child-trafficking poster as she takes part with hundreds of NGO to uphold the dignity of human beings and ensure their fundamental rights, in this file photo (Photo by Jewel Samad/AFP)

The Bhutanese government demonstrated increasing efforts to identify its first potential trafficking victims, and to investigate and prosecute under its trafficking law. However, the government's laws do not prohibit all forms of trafficking.

While the government continued to work with an international organization to draft standard operating procedures (SOPs) on victim identification and referral, it had not finalized the SOPs by the end of the reporting period.

The government's understanding of trafficking crimes remained poor and it was unclear if identified victims received protection services, according to the TIP Report.

The government has allocated budget for shelter programs for female and child trafficking victims, and adopted an action plan for children, which includes plans to prevent child trafficking and protect child victims.

However, the TIP Report says the government did not meet the minimum standards in several key areas, including overall victim identification. Its protection of victims remains inadequate and inconsistent.

The government's conviction rate and the number of investigations, prosecutions, and convictions were disproportionately low relative to the scale of trafficking in India, particularly with respect to bonded and forced labor, the report says.

The TIP Report promoted Myanmar from Tier 3 to the Tier 2 Watch List despite continued criticism of Aung Saan Suu Kyi's government for failing to end religious and ethnic conflicts, and the persecution of Rohingya Muslims especially.

The report also removed Myanmar from a list of countries that recruit and use child soldiers.

A statement released by the group in response to the report described the decision as "premature" and said it undermines U.S. credibility in the fight against the use of children in warfare.

According to the group's statement, Myanmar continued to recruit children to the armed forces in 2016. Three people in Myanmar facing charges of human trafficking emerge in handcuffs from the court building following trial in Yangon in this file photo. (Photo by Romeo Gacad/AFP)

Nepal demonstrated increasing efforts to tackle trafficking compared to the previous reporting period by increasing the number of investigations and victims identified, the report says.

The government partly achieved this by doubling its budget to provide victim care services to female victims of violence, including trafficking victims.

The government conducted awareness activities around the country and revoked the licenses of more than 400 foreign employment agents located outside Kathmandu, reportedly to reduce the exploitation of migrant workers.

Pakistan remained in Tier 2 for the fourth consecutive year despite effective legislation to check child abuse and sex trafficking by the provincial governments.

The national government amended its national strategic framework against trafficking in persons and human smuggling to extend it through 2020 and ratified the U.N. Convention on the Rights of the Child Optional Protocol on Armed Conflict.

Provincial governments implemented different measures to address trafficking, from more stringent sentences for child sex trafficking in Sindh and Punjab to the creation of new child protection units across Balochistan.

Punjab opened its first wholly-integrated women's shelter for victims of violence and removed approximately 79,000 children working in brick kilns, some of whom may have been victims of bonded labor.

The national government, however, did not demonstrate an increase in its efforts compared to the previous reporting period.

The Sri Lankan government was identified as having demonstrated an increase in efforts to combat human trafficking compared to the previous reporting period.

It rates nations on how effectively governments are tackling the human trafficking. The scale ranges from the worst nations in Tier 3, who make no significant effort to comply with the U.S. minimum standards, to the best nations in Tier 1 who meet the minimum U.S. standards.