A man wearing a mask walks back to his residence in Dhaka, Bangladesh, during the Covid-19 pandemic. South Asian countries continue to register an increasing number of new infections and deaths as the second wave hits the region. (Photo: Stephan Uttom/UCA News)

South Asian governments and church leaders are grappling with the Covid-19 pandemic as experts warn that a second wave of the deadly virus could be more devastating during winter.

This week South Asia became the only second subregion after North America to record more than 10 million infections. The region has recorded 18 percent of global cases and 11 percent of deaths, data from national public agencies shows.

South Asia is home to about 25 percent of the world population and about half of them are classified as poor.

All countries in South Asia except Bhutan have been recording a rising number of new cases in recent weeks as public health officials said the second wave of the pandemic had arrived.

There are also warnings that the onset of winter and air pollution in South Asian countries including India, Pakistan and Bangladesh will result in worsening the situation and lead to more infections and deaths.

India, the largest country in the region, has recorded over nine million cases and more than 132,000 deaths. Although the spread of the virus has slowed, over the past few days it has been recording more than 30,000 cases on average, the highest daily cases in four months.

Analysts blamed the rise on lax health protocols and air pollution during the Diwali festival for the surge in cases in India.

In Bangladesh, more than 2,000 daily cases have been recorded for three straight days this week, which is one positive case per eight tests, higher than the benchmark of the World Health Organization (WHO). The nation has so far recorded more than 441,000 cases and 6,305 deaths, the second-highest rate in the region. The government has ordered strict health regulations including mandatory use of masks and physical distancing with provision for punishments.

The government has been following “no mask, no service" policy in all state-run institutes and running mobile courts to impose wearing of masks by people on the streets. All education institutes have been closed since late March despite lifting of lockdown restrictions in May.

Prime Minister Sheikh Hasina recently appealed to Bangladeshis for “a collective effort” to tackle the second wave of the pandemic. 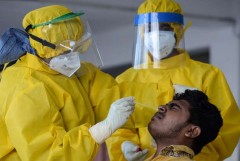 The Pakistani government warned about a more lethal second wave of the virus in October. Over the past three days, the nation has recorded more than 12,000 new cases, with some 7,248 cases on Nov. 19 alone.

Nepal, which has recorded over 215,000 cases in total, has continued to register more than 1,000 cases daily in the past week, with health experts fearing a looming “catastrophe” in the Himalayan nation.

Churches in South Asian countries have opened up since governments relaxed lockdown restrictions. However, turnout continues to remain low for public liturgies.

The Bangladesh Church recently suspended online Sunday Mass as all churches reopened and restarted services. In cities and rural areas, public presence has been about half the usual as elderly people mostly remain at home.

“I want to go to the church but I am a diabetic and high blood pressure patient. I am scared to attend any public gathering,” said a Catholic from Bangladeshi capital Dhaka who has not visited church since April.

In India, churches have reopened in most states except for Maharashtra, a Covid-19 hotspot. The state government announced on Nov. 15 that worship places could reopen from Nov. 16 if they are outside the containment zones.

In Sri Lanka, church services remained suspended amid an uptick in Covid-19 infections and deaths in recent weeks. Before the second wave in October, the nation recorded only 3,396 cases and 13 deaths. On Nov. 19, the number of infections stood at 18,841 and 73 deaths.

The surge in infections forced Catholics to rely on online liturgy for spiritual nourishment and they also continued to hold online vigils and prayers to halt the deadly advance of the virus.

Cardinal Malcom Ranjith, archbishop of Colombo, urged Catholic families to stay strong and keep praying for the nation and the world.

"We need to fulfill our spiritual responsibilities in the face of Covid-19. All families can pray together to save our country and the world from this catastrophe," the prelate said in a social media post.