President Barham Salih blames corruption and mismanagement for the disaster 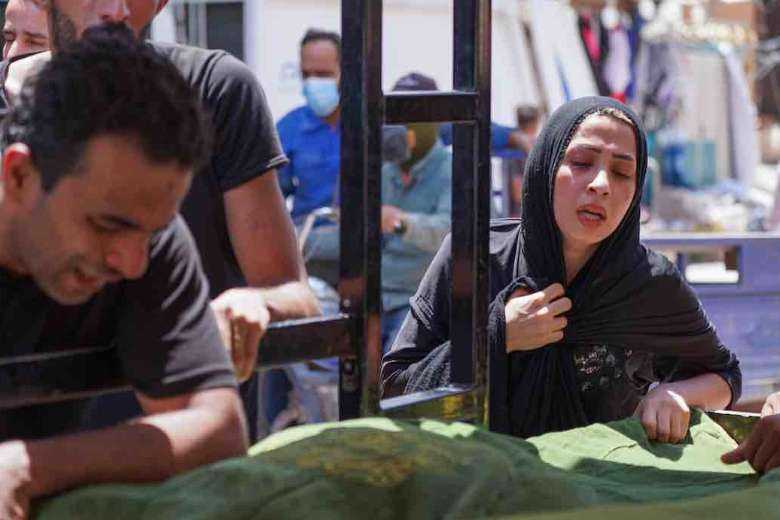 Iraqis mourn relatives who died in a massive fire that engulfed a coronavirus isolation ward of Al-Hussein hospital in the southern Iraqi city of Nasiriyah, during their funeral in the central city of Najaf, on July 13, 2021. (Ali Najafi/AFP)

Grief and anger gripped the Iraqi city of Nasiriyah on Tuesday after fire swept through a temporary Covid isolation unit, killing at least 64 people and injuring dozens.

The devastating blaze on Monday evening at the southern city's Al-Hussein Hospital, which medics said was fuelled by oxygen canisters exploding, was the second such tragedy in Iraq in three months.

"Sixty-four (bodies) were retrieved and 39 identified and handed over to their families," a source at the provincial forensic science department told AFP.

"Medical teams and relatives of victims are finding it difficult to identify the rest of the corpses," the source said, adding that the toll could rise as more bodies were feared buried under the rubble.

An official tally listed in local media said 39 of the victims so far identified were women.

"We heard their screams but we couldn't help them much," said activist Hisham al-Sumeri, who had helped in the relief effort.

He accused the authorities of negligence.

'Not fit for animals'

Smoke was still rising from the charred debris of the temporary building on Tuesday, as grieving relatives looked on.

"A patient comes in looking for treatment and he ends up being carried out in a coffin," said Abou Nour al-Shawi, an elderly onlooker.

He pointed out the frailty of the structure, which had collapsed quickly in the flames.

"This place is not even fit for animals," he said.

As the first funerals were held, indignant protesters vented their outrage at provincial authorities they blame for the deaths, an AFP correspondent said.

In Al-Dawaya, east of Nasiriyah, a joint funeral was held for six members of a single family who had died in the inferno.

In Al-Nasr, north of the city, mourners laid to rest two brothers and two sisters who perished in the flames.

Other funerals were held in the Shiite holy city of Najaf, where mourner Yunus Saleh blamed politicians for the tragedy.

"My family lost five members and a sixth wasn't found. We couldn't identify his body," he said.

"Where else would something like this happen? Where? The (political) parties burned them."

Hundreds of young protesters shut down private hospitals in Nasiriyah to pressure the authorities to open the doors of a new public hospital.

But the more than 400-bed facility has yet to open to patients.

On Tuesday, Kadhimi declared three days of national mourning for the "martyrs" of Nasiriyah.

The city is seen as the heart of a nationwide anti-government protest movement that broke out in late 2019.

"The state must take the necessary measures... to confront the corrupt," one young protester told AFP.

He said those responsible must be held "accountable... in transparent investigations that show people that it (the state) is serious about putting an end to these tragedies".

President Barham Salih on Tuesday blamed the "catastrophe" at Al-Hussein Hospital on "persistent corruption and mismanagement that undervalues the lives of Iraqis".

Salih recalled an April fire at a Baghdad Covid-19 hospital which killed 82 people and injured 110.

It too was sparked by an explosion of badly stored oxygen cylinders.

The April fire triggered widespread anger, resulting in the suspension and subsequent resignation of then health minister Hassan al-Tamimi.

Pope Francis, who paid a historic visit to Iraq in March, issued a statement saying he was "deeply saddened" by Monday's tragedy.

Iraq -- whose oil-dependent economy is still recovering from decades of war and international sanctions -- has recorded more than 1.4 million coronavirus cases and more than 17,000 deaths.

Much of its health infrastructure is dilapidated, and investment in public services has been hamstrung by endemic corruption.