Monsignor Jeffrey Burrill is entitled to a private life, but not a secret life, much less a double life The Pillar's exposé has caused a storm in the Catholic world. (Image: ncronline.org)

The Pillar, a web publication covering news and analysis about Catholicism, is in the eye of a storm for breaching media ethics by exposing the private life of Monsignor Jeffrey Burrill, general secretary of the US Conference of Catholic Bishops (USCCB).

The exposé shows the senior priest used Grindr, the gay hook-up app, everywhere he lived or visited over a period of years. The priest resigned from his bishops’ conference office on July 20.

Monsignor Burrill is entitled to a private life, but not a secret life, much less a double life. But the way The Pillar exposed the high-ranking priest leaves much to be desired.

A wave of condemnation followed its unethical use of personal data to target Monsignor Burrill’s double life of unchastity.

The Pillar, which specializes in investigative reports, has not convincingly explained how it accessed Burrill’s location data. It simply stated that it “was obtained from a data vendor and authenticated by an independent data consulting firm contracted by The Pillar.”

The paid news site, however, did not name the vendor nor has it stated whether it paid for the information.

Experts on data privacy say it is possible to buy location data from third-party data brokers and it can be de-anonymized with additional information like a person’s home and workstation.

Apps share data like location histories and demographic information with brokers and marketing firms. The Pillar weaponized Monsignor Burrill’s smartphone data in this way to zero in on him and make him a target of public shaming. The Pillar bought data for sale on a commercial market.

Grindr and similar apps allow users to contact nearby users of the app. This helps them to chat and exchange images or to meet for the sake of an anonymous sexual encounter.

Grindr, which calls itself as “the largest social media network for gay, bi, trans and queer people,” has in its stable more than 30 million users/members and nearly 3 million people use it on a daily basis. That results in a plethora of information, which is later morphed into data that is up for sale. 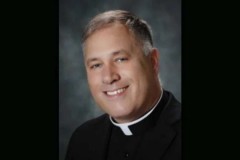 The app has denied that its data was publicly accessible. “The alleged activities listed in that unattributed blog post are unfeasible from a technical standpoint and incredibly unlikely to occur,” a Grindr spokeswoman told The Washington Post.

Had the writers of The Pillar piece — J.D. Flynn and Ed Condon — selected the batch of data with the specific motive to target Monsignor Burrill? Or did the news site target a location (USCCB offices) and narrow down their search to Monsignor Burrill?

The use of such public data is apparently permissible under the law. But using it for personal vendettas does not seem ethical, especially for the media and journalists.

According to The Pillar, Monsignor Burrill frequented gay bars, residences for single men and even a notorious sauna in Las Vegas while working for the USCCB. Therefore, it is possible Monsignor Burrill violated his priestly vows by having homosexual relations. Going by The Pillar report, the Grindr data only confirms location and app use, not sexual activity, if at all committed by Monsignor Burrill.

A priest attached to the Diocese of La Crosse in Wisconsin, Monsignor Burrill joined USCCB as associate general secretary in February 2016. In that role, he coordinated the US bishops’ response to the Church’s 2018 sexual abuse scandals.

In November last year, Monsignor Burrill was elected as general secretary of the USCCB for a five-year term. His responsibilities included coordinating all administrative matters of the conference and being responsible for the coordination of the work of its committees and staff.

According to The Pillar investigation, he used the location-based Grindr app from various locations between 2018 and to 2020, even while traveling on assignments for the USCCB.

The Pillar stated that a mobile device owned by Monsignor Burrill emitted signals from his USCCB office and his USCCB-owned residence, and during episcopal meetings and events in other cities and places.

So far, clerical double lives and sexual abuse involving minors have not been part of serious media exposés in Asia

According to some Catholics, the crime of spying on someone is far worse than serially breaking one’s vow of chastity.

The Burrill exposé was embarrassing to the Church, particularly the hierarchy that continues to oppose gay sex and same-sex unions as sins against divine plans.

So far, clerical double lives and sexual abuse involving minors have not been part of serious media exposés in Asia. Reports say police have collected text messages with sexual connotations from some clergy accused of sexual violations in some part of Asia. That is an indication.

However, The Pillar episode remains a warning to priests of the danger of indiscreetly downloading and using apps and networks to make themselves “NewGen.”

The discussions should not be about the demerits of using apps but about being truthful to the vocation of being disciplined disciples of Christ and being committed to the call.

St. Augustine might reword his famous quote today as: “Love God, and use whatever app you please.” The age has changed. Not only God is watching above us, but the satellites are also active.