Salvadoran President Nayib Bukele gestures during the delivery of computers to students in public sector educational centers at the presidential house in San Salvador on Feb. 22. (Photo: AFP)

Ask in El Salvador about the Feb. 28 legislative and municipal elections and you'll get two different answers of what the results could bring: a move toward a dictatorship or a chance to move the country forward.

Polls show Nuevas Ideas (New Ideas), the party of Salvadoran President Nayib Bukele, pulling ahead of the country's two main political parties and set to gain control of municipalities and at least a simple majority in the Salvadoran Legislative Assembly, the equivalent of U.S. Congress. If that happens, it will place much of the country under the control of the New Ideas party -- a feat for any political party in the past 30 years here, but more so for one that was not even formally established three years ago.

Some Catholic leaders in recent days have joined other Christian notables in pointing out that the path to get to this point has produced greater polarization in Salvadoran society, as well as the erosion of public trust in institutions that have maintained political peace in the country for almost three decades. The leaders warn about the harm already harvested: the death of two Salvadorans who were part of a caravan of leftist sympathizers fired upon at an intersection in late January.

Authorities are investigating the crime and have suspects under custody -- all security personnel or affiliated with the government run by Nuevas Ideas.

Some religious leaders argue that election season, which should be a time to celebrate hard-fought-for democracy and a plurality of ideas in El Salvador, has instead turned into idolatry of political actors and a disregard for the truth and for the lives of political opponents.

"We, pastors and priests of various Christians denominations, with deep concern for the situation of sin that permeates Salvadoran politics and society in general, we wish to speak the truth in love to the churches and people in general to warn them against temptations, false doctrines and political idolatries," a group of 69 religious leaders wrote in a statement published Feb. 17 in one of the country's major newspapers.

Among them were 11 Catholics, including Bishop Oswaldo Escobar of Chalatenango and Jesuit Father Andreu Oliva, rector of José Simeón Cañas Central American University, known as the UCA.

"We express our deep sorrow over the practice of lying that has invaded political life and is contrary to the commitment to truth that is morally crucial for personal and public life ... what we now observe is a normalization of lying without decorum in the mouth of those who should be leaders of the country," the statement said. "Lying by officials is premeditated, persistent and shameless."

One of the popular political attack ads that has been used online in the past shows a black briefcase, an image used to insinuate that anyone who seems to question the president or his party likely has received one just like it full of cash. And no one is exempt from the accusation.

When Cardinal Gregorio Rosa Chavez was asked about the president's first year in office and raised concerns about the government's lack of transparency, sympathizers of Nuevas Ideas railed against the prelate, accusing him of receiving the black briefcase and in some cases, Photoshopped the briefcase in photos of him at a meeting with the president's opponents. 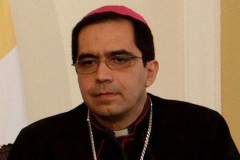 In a Feb. 19 editorial, analysts at the Jesuit-run UCA said the tactics characterize Bukele's government, which attacks others using "an authoritarian style."

But to some like Guadalupe Barahona Centeno, a Catholic mother of three from Soyapango, who supports the president and his party, Bukele's tactics amount to bluster, and she said she's been a bit disappointed with the church's not-so-veiled criticism.

"I would never support a dictatorship," she told Catholic News Service in a Feb. 23 interview.

Even though she did not agree with the president's actions in February 2020, when he took armed soldiers into the halls of the country's legislative assembly to pressure lawmakers into signing a $109 million loan for security, she said political groups she has supported in the past have done little to improve the lives of Salvadorans. That's why she supports Bukele and his party, she said.

"I haven't benefited directly," Barahona said, "but I know people who have."

But other Catholics such as Cástulo Ramírez Marín from Arcatao said the church has a right to question and to point out dangers ahead. Ramírez had children killed during the country's civil war in the 1980s.

In a Feb. 2 interview with CNS, he said he was aghast when he heard news of the shootings against the caravan and said that while the economic and political situation in El Salvador may not be ideal, he is frightened that Nuevas Ideas could be leading El Salvador on a path back to a bloody past.

To some like Jesuit Father José María Tojeira, director of the UCA's Human Rights Institute, some of the immediate danger in the days ahead may not come in the form of physical harm but in the erosion of public trust of institutions in El Salvador's fragile democracy.

On the political TV show Encuentro TVX Feb. 15, Father Tojeira said it was hard to figure out why the president was alleging fraud before votes were cast, particularly if polls project his party will win, but then he hinted at a reason.

"I don't know what they want or are concerned about. ... If they talk about fraud when there is none, credibility in institutions is lost," Father Tojeira said during the program.

Archbishop Jose Luis Escobar Alas of San Salvador, seeming to try to stay out of the fray, said he hoped the elections would be an occasion for "a civic national feast." During a Feb. 21 news conference, he called on all political parties to maintain an "attitude of respect."

In what seemed like a last-ditch effort to draw voters away from political fanaticism, the UCA urged voters Feb. 22 to put feelings aside, to consider the calls of religious leaders for dialogue and a less-polarizing atmosphere.

The university urged others to listen to the message of the religious leaders, which, at a time of "authoritarian leadership, presented with almost messianic overtones," warns of the threats against democratic institutions as means to gain "absolute control of the state."

"Voting does not fix everything, but it helps to build democracy if it encourages reflection, long-term thinking and the solution of endemic problems that are based on poverty and inequality," the statement said. "Not thinking, getting carried away by fleeting feelings, can lead to despair in the end."