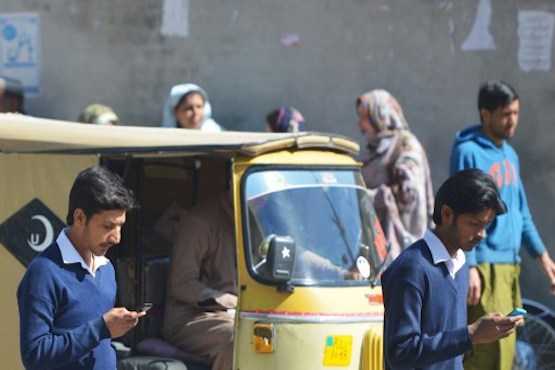 Pakistani students browse their smartphones on a street in Rawalpindi in this file photo. (Photo by AFP)

Earlier this month, another Christian was charged with blasphemy after his Muslim friend alleged he had sent a poem on WhatsApp that insulted Islam.

Nadeem James of Sarai Alamgir fled his town to avoid what usually follows: mob attack, police brutality, prison sentence and even a possible extrajudicial killing. His relatives have been taken into protective custody and it might be days before he surrenders himself to an uncertain fate.

A similar incident occurred in May when local Muslims boycotted Catholic villagers, socially and economically, after a Christian was accused of watching an anti-Muslim video on YouTube.

The trend of using social media for blasphemy accusations is new in the Islamic Republic. And in today's digital age where 17.8 percent are online, it opens another front to attack religious minorities.

Non-Muslim citizens of Pakistan are already cautious not to keep any Islamic literature in their homes, afraid of being accused of "mishandling" it — even if their intention was to learn about the Muslim religion.

Surfing for Islamic internet content is also a danger zone. "Many of our people have learned how to use the internet. But it is the moral duty of parents and Christian leaders to educate our youth about the risks," a priest told me.

In April last year, the government passed the Prevention of Electronic Crimes Bill which allows for an official intervention against online criticism of religion. Free-speech activists questioned its ambiguous definition of the crimes. But, with a history of banning Facebook and Youtube, there is little hope the state will do anything to safeguard religious minorities from cyber bullies.

The church is considering ways to protect its people. The Catholic Church in Pakistan has been engaged in media education for years. Nowadays, social media is the most talked about topic, besides photography, in seminars organized by the social communication commission of Faisalabad Diocese.

The Pope may have nixed on his own Facebook page but for most Catholic priests in the country, Facebook is a popular platform to update people about their work. It's helpful in restrictive regions like Peshawar, the city hardest hit by Taliban insurgency.

But the Catholic bishops' Commission for Catechetics prefers a more traditional way of reaching out to people. "What good will it do posting photos of children getting their first communion? What do people learn from that?" its spokesman said.

Priests sharing their personal information on social media is another area of concern. A Capuchin priest even shares the number of his National Identity Card and complete residential address in his e-mail signature.

The church is slowly educating people to the dangers this poses but Lahore Archdiocese, the oldest diocese in the country, still depends on Rabita Manzil — National Catholic Center of Social Communication — for media awareness.

"How beautiful it is when people select their words and actions with care," said Pope Francis in his message for the 50th World Communication Day. "In an effort to avoid misunderstandings, heal wounded memories and to build peace and harmony.”

The Second Vatican Council in the decree on Social Communication Inter Mirifica also recommended that youth receive information from social communications in moderation and under the supervision of teachers, parents.

Hence the church must invest more in sensitizing Catholics about using this technology to its advantage rather than it being a disadvantage. To begin with, it must revive the commission of social communication in all the seven dioceses. Media sessions should begin at parish levels. Faisalabad Diocese has already taken such a lead. This should continue in all dioceses and ultimately at the national level.

Officials from the social communication department in the church should share the risks pertaining to using social media especially with the younger generation and educate them with technical information to keep their virtual accounts safe. Simple tips like safer of passwords and avoid logging in on insecure devices can save lives.

Trusting the right people in your surroundings is another important step to avoid risk of being accused of blasphemy especially through social media if you live in Pakistan. In our religious driven society, an estranged colleague or even a Facebook friend is no exception.

A little precaution in the virtual life can help religious minorities survive the real one.