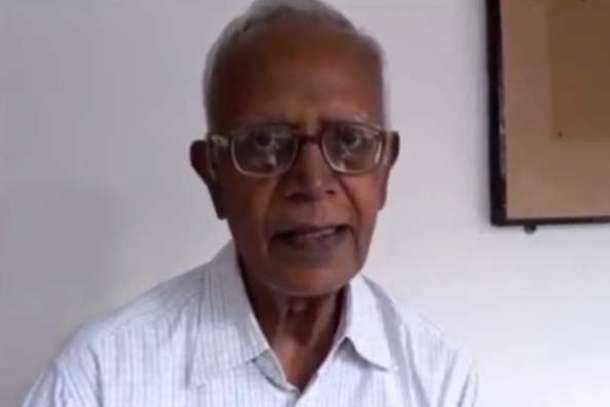 A screengrab from a video where Father Stan Swamy explained why police wanted him in a conspiracy case.

Thanks to a sustained social media campaign, an elderly Indian Jesuit priest under detention for the past two months can now use a sipper mug for drinking water without being affected by his Parkinson's disease.

Father Stan Swamy, 84, has been pleading with courts to provide him with a straw or sipper ever since he was detained on Oct. 9 in Mumbai, the capital of Maharashtra state in western India. A court is yet to order in his favor but government officials and Jesuits have confirmed that jail authorities have changed their decision and provided Father Swamy with a sipper mug and straws."It is true Father Swamy is provided with a sipper," said Father A. Santhanam, a Jesuit lawyer based in Tamil Nadu who is following the case closely. "Reliable sources have confirmed to us that Father Swamy has been given a sipper, but his demand for warm clothes is still pending." Father Santhanam thanked social media users for their concern. "Humanity is still alive in our society," he told UCA News on Dec. 2.He said the aged priest has been taking inmates' help to drink water, tea and other liquids. "Now, he will not require the support of other inmates to drink water," the priest said.The National Investigation Agency (NIA), the federal anti-terror combat agency, arrested Father Swamy on Oct. 8 from his residence in Ranchi, capital of eastern Jharkhand state. He was accused of sedition and having links with an outlawed Maoist group — charges that the priest and his colleagues consistently denied. Soon after his detention, Father Swamy requested jail authorities for a sipper. But when it did not yield any result, he moved an application before the NIA court on Nov. 6.The NIA court, without passing any instant order, posted the case for Nov. 26. But on that date it posted again for Dec. 4 to decide whether a sipper mug could be given to Father Swamy.The court's approach forced the social media fraternity to launch a campaign under the hashtag #sippersforstan. It started trending, forcing jail authorities to reconsider their decision. Netizens criticized the NIA for its "inhuman approach" toward an elderly sick person. Hundreds of people also sent straws and sippers to jail authorities.Maharashtra state's home minister Satej Patil told media on Nov. 29 that the priest had been provided with a sipper. He also said jail officials were taking good care of the priest, dismissing reports that he was ill-treated. "A lot of misinformation is being spread … the jail authorities are taking good care of Swamy," he said, adding that if needed the government was willing to move the priest to a private hospital. Local media also quoted Sunil Ramanand, additional director deneral of police, as saying that Father Swamy was being given all basic facilities and medical assistance at the prison hospital, including straws and a sipper.In his communications to his priest colleagues, Father Swamy said that he used to accept help from other jail inmates for washing his clothes, eating, drinking and other daily chores.Father Swamy was arrested in connection with January violence in Bhima Koregaon in Maharashtra in which one person was killed and several others wounded.He is among 16 persons arrested in the case. They face trial for sedition, conspiracy and links with Maoist rebels, among other serious charges.

A day before his arrest, the priest said in a video that what is happening to him was "not something unique happening to me alone; it is a broader process taking place all over the country."

He added: "We all are aware of how prominent intellectuals, lawyers, writers, poets, activists, student leaders are put in jail because they have expressed their dissent or raised questions about the ruling powers of India."He said he was part of the process and not a "silent spectator" and was "ready to pay the price whatever it be."The priest has worked for poor tribal and other impoverished people in Jharkhand and other places in his five-decade-long priestly ministry.