When using social media, Ogechi Akalegbere, a catechist and co-chair of the pastoral council at St. Rose of Lima Church in Gaithersburg, Maryland, US, finds it's prudent to ensure that her posts honestly reflect her views and are respectful of others.

"The world does not need to know everything about me," she said Dec. 2 during an online discussion about the use of social media by young adults sponsored by the Archdiocese of Washington and the Initiative on Catholic Social Thought and Public Life at Georgetown University.

The program was the final segment of a three-part series on "Pope Francis, Young People and Solidarity: Dialogues on 'Fratelli Tutti.'" The series focused on various aspects of the pope's 2020 encyclical "Fratelli Tutti, on Fraternity and Social Friendship."

Akalegbere, 33, was one of three discussion participants who described their use of social media and offered advice to young adult viewers on how to gain positive experiences from their interactions on the various online platforms that exist.

They suggested that engagement with others in social media can generate positive feelings, especially because the ebbs and flows of the COVID-19 pandemic continue to limit in-person interactions, leading to greater isolation.

They also cautioned the overuse of social media can be detrimental to a person's "spirit."

Like anything else, there are pros and cons about social media, said Vanesa Zuleta Goldberg, a digital content specialist for the National Federation for Catholic Youth Ministry and a participant in the Vatican's "Faith Communication in the Digital World" program.

Goldberg described seeing examples of young people using social media in a "balanced way that's proactive in empowering and also lifting up voices that are constantly at the margins."

Still, she cautioned, in whatever ways social media are used, they only present "a highlight reel" of a person's experiences and "the whole picture" of an individual is never seen online. 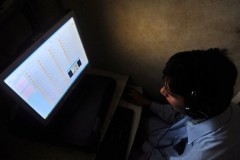 Pope Francis' references to social media in his encyclical focus on the positive aspects of online interaction, even as he signaled the danger of becoming isolated behind a smartphone or computer screen, Bishop Christopher J. Coyne of Burlington, Vermont, explained.

"The pope's concerns focus more on the behaviors of users rather than the various means to post digital content," said Bishop Coyne, who has maintained an active online presence for nearly two decades as he has promoted church teaching and kept in touch with parishioners.

"The real challenges occur because digital media can lead to dark places," he said.

"It's leading us into a place where we are not connecting with people but becoming more isolated in the way we engage with people. We are not moving out of the building," he continued.

"His warning is that it is not enough to rely on these digital connections for any kind of meaningful human encounter. He is constantly saying and challenging us in many ways to move out and away from our screens or phones into a place where we meet other people," the bishop said.

It is through such encounters in person and online that Akalegbere has been able to raise up the voices of people not often heard in the church or by society.

She referred to her podcast, "Tell Me if You Can," in which she shares the diverse stories of women telling their story of accomplishment or overcoming a challenge in the hope of inspiring social change.

Akalegbere acknowledged that for millennials, those born from 1981 through 1996, digital media is the primary mode of communication. She encouraged the online viewers to learn how to use social media "in a healthy and balanced way" whereby it does not dominate their lives or create animosity and anger.

When posting something online, Akalegbere said she asks, "Does this reflect who I am or is it respecting someone else?"

She also called on people to "being open to stepping outside of the echo chamber" when considering what to post.

Goldberg said her work with the Vatican has introduced ways of seeing how social media can affect the lives of others.

She said there are 16 people in the Vatican "Faith Communication in the Digital World" program; they are in their 20s and 30s. The program has allowed participants to hear how social media "has captured their local church community in different ways through culture, language and pastoral approaches."

The conversations have enabled the participants, who are from around the world, to understand that social media cannot be ignored or dismissed, but to see the numerous online platforms as a means to engage their faith.

It is such engagement that has guided Bishop Coyne's use of social media. He recently introduced an online video series, "Coffee with Bishop Coyne," that explores the life of the church in Vermont, across the United States and around the world.

"I think more in terms of the care for the soul is to me something that is very important in how I engage on social media," the bishop said. "(I) try to help other people come to know the Lord Jesus as I know him in the Catholic Church. To love him, to serve him with all my heart and try to help them find a way to him as well."

Further, he suggested, that "when a young person is constantly on the phone or the iPad or whatever they are doing, we around them who are older and wiser might encourage them to recognize that is not the be-all and end-all of existence."

Each discussion participant continually returned to the importance of engaging others in person as much as possible to build community and understanding.

"All of us putting all of our eggs in those baskets is limiting ourselves," she said. "It's limiting the accountability we can hold for ourselves and the level of accountability we can call to be held for other people. We need to engage with people on other platforms and other spaces, hopefully in person, to take in this whole experience of my humanity interacting with your humanity."