Earlier interviews from Argentina tell us about the pope's likes and interests. 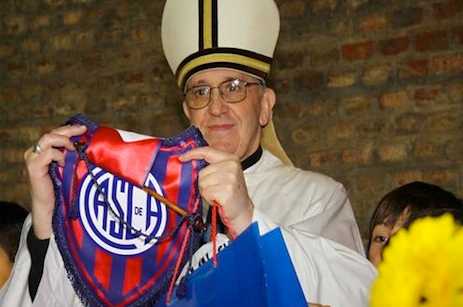 Here are a few of Pope Francis' favorite things, which he revealed in a series of interviews granted while he was archbishop of Buenos Aires.

The interviews are in the book, "Pope Francis: Conversations with Jorge Bergoglio" by Sergio Rubin and Francesca Ambrogetti, which was originally published in 2010 under the title "El Jesuita" ("The Jesuit"). It is not yet available in English.

-- Favorite sports: When he was young, the future pope played basketball, but he loved going to the stadium to watch soccer with his whole family to see their favorite team, San Lorenzo. He lamented that the fan scene is not what it used to be. At the worst, "people would yell at the referee that he was a bum, a scoundrel, a sellout ... nothing in comparison to the epithets they use today," he said.

-- Favorite city: "I love where I live. I love Buenos Aires." He has traveled in Latin America and parts of Europe, including Ireland "to improve my English." However, he said, "I always try to avoid traveling ... because I'm a homebody" and got homesick easily.

-- Favorite way to stay informed: Newspapers. He said he turned on the radio only to listen to classical music. He had thought he'd probably start using the Internet like his predecessor, the late-Cardinal Juan Carlos Aramburu of Buenos Aires, did -- "when he retired at 75."

-- Favorite mode of transport as cardinal archbishop of Buenos Aires: The subway, which he would always take to get around "because it's fast; but if I can, I prefer the bus because that way I can look outside."

-- Favorite pastime: As a boy, he liked to collect stamps. Today, "I really like reading and listening to music."

-- Favorite authors and books: "I adore poetry by (Friedrich) Holderlin," a 19th-century lyric poet; Alessandro Manzoni's "The Betrothed" ("I Promessi Sposi"), which he said he has read at least four times; Dante Alighieri's "The Divine Comedy"; and anything by Fyodor Dostoevsky and Argentine writer Jorge Luis Borges.

The pope recalled that even though Borges was an agnostic, "he'd recite the 'Our Father' every evening because he had promised his mother he would, and died with a sense of 'religious comfort.'"

-- Favorite music: "Leonore" Overture No. 3 by Ludwig van Beethoven conducted by the late-Wilhelm Furtwangler, "who, in my opinion, is the best conductor of some of (Beethoven's) symphonies and works by Wagner."

-- Favorite dance style: tango, which he said he loves "very much. It's something that comes from within." He said he danced the tango when he was young "even though I preferred the milonga," which is an older form of tango with a faster rhythm.

-- Favorite movie: "Babette's Feast" because it shows the transformation of a group of people who took denial too far and didn't know what happiness was, he said. The sumptuous meal helps free them from their fear of love, he said. He also likes Italian neorealism films, which often confronted the social, economic and moral consequence of World War II, but added that as archbishop he didn't have much time to go to the movies.

-- Favorite painting: "The White Crucifixion" by Marc Chagall. The scene "isn't cruel, rather it's full of hope. It shows pain full of serenity. I think it's one of the most beautiful things Chagall ever painted."

-- Favorite person: His grandmother Rosa, who helped raise him when he was little, taught him his first words of Italian and passed on her deep religious sensibility.

-- Favorite saint he turns to in time of need: St. Therese of Lisieux. He kept a photo of her on his library shelf with a vase of white roses in front of it. "When I have a problem I ask the saint, not to solve it, but to take it in her hands and help me accept it."

-- Favorite virtue: "The virtue of love, to make room for others with a gentle approach. Meekness entices me enormously! I always ask God to grant me a meek heart," he said.

-- Worst vice to avoid: "The sin that repulses me most is pride" and thinking of oneself as a big shot. He said when it has happened to him, "I have felt great embarrassment and I ask God for forgiveness because nobody has the right to behave like this."

-- Typical reaction to unexpected announcements: He freezes. When Pope Francis was elected pope and appeared at the central balcony, many noticed he looked rather stiff. Turns out that's how he reacted when he was named auxiliary bishop in 1992 and how he reacts "to anything unexpected, good or bad, it's like I'm paralyzed," he said.

-- Things he would rescue in event of a fire: His breviary and appointment book, which also contains all of his contacts, addresses and telephone numbers. "It would be a real disaster to lose them."

"I'm very attached to my breviary; it's the first thing I open in the morning and the last thing I close when I go to sleep."

He also keeps tucked safe between its pages his grandmother's letters and her last words to her grandkids before she died. She said that in times of sadness, trouble or loss, to look to the tabernacle, "where the greatest and noblest martyr is kept," and to Mary at the foot of the cross so that they may "let fall a drop of salve on the deepest and most painful wounds."