But, in the wake of the tragic Easter Sunday bombings, worshippers are banned from taking bags to church events and they have been warned not to congregate in groups after Masses.

A local group of radicals affiliated with the so-called Islamic State bombed three churches and three luxury hotels on April 21, killing 253 people, nearly all Christians, and injuring more than 500.

Large church public gatherings, such as processions, are still not being held.

"The annual feast of St. Anthony's church at Weliweriya in Gampaha celebrated their feast in a simple way and cancelled the procession," said Fernando who is also a Sunday school teacher. 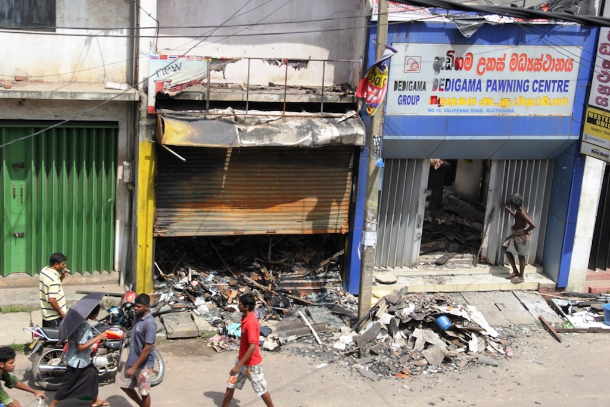 Army and police personnel stand guard at every church and school entrance.

To make the placing of bombs by terrorists more difficult, school children and Sunday school participants have been asked to replace their usual bags and satchels with small transparent ones.

"Priests in many parishes have scaled back various church activities in the wake of the terror attacks," Fernando said.

Those who were killed in the Easter Sunday attacks were remembered at various modest feast day celebrations and there were expressions of hope for the recovery of those who were injured, Fernando said.

Church services in the country on week days have also restarted with their own security arrangements in place with the help of parish volunteers.

Catholic private schools and government run schools closed after the Easter bombings have all reopened.

But Fernando said that students attending classes are subjected to body searches.

Father Luckston de Silva, media spokesperson for Mannar Diocese in Northern Province, said that the 'Our Lady of Madhu' feast would be held as usual on July 2.

"Owing to the prevailing situation in the country, the security will be tightened and the faithful who come to the shrine should extend their support to maintain security," said Father de Silva.

People's fears that there will be more terrorist attacks have been heightened by new intelligence agency reports that Sri Lanka and India remain under threat with Islamic State turning its attention to the Indian ocean region in the wake of losses across Syria and Iraq.

In Sri Lanka, an army and police presence is still highly visible in major cities and towns as well as some villages as security forces continue daily search operations.

President Maithripala Sirisena told parliament that most of the suspects with links to terror groups have been arrested.

Cardinal Malcolm Ranjith said that it was a grave crime to kill innocent people.

"The youth who were involved in exploding the bombs in our churches on Easter Sunday did so, to manifest their political line of thinking to the world," said Cardinal Ranjith at the consecration of a new church in the port city of Negombo.

And at another event, Cardinal Ranjith stressed that the nation needs leaders who will safeguard people's rights.

"There should be a leadership that will work for the country rather than themselves," said Cardinal Ranjith. "A leader with a back-bone who is not afraid to punish wrongdoers."

Catholic priests have filed a petition with the Supreme Court of Sri Lanka targeting the government for failing to act on warnings that could potentially have prevented the Easter Sunday bombings.

The Sri Lankan government has initiated several investigations into the Easter Sunday blasts.

A Presidential Commission has recommended that criminal and disciplinary action be taken against senior police officials who failed to prevent the attacks.

President Sirisena on June 21 further extended a State of Emergency for another month.