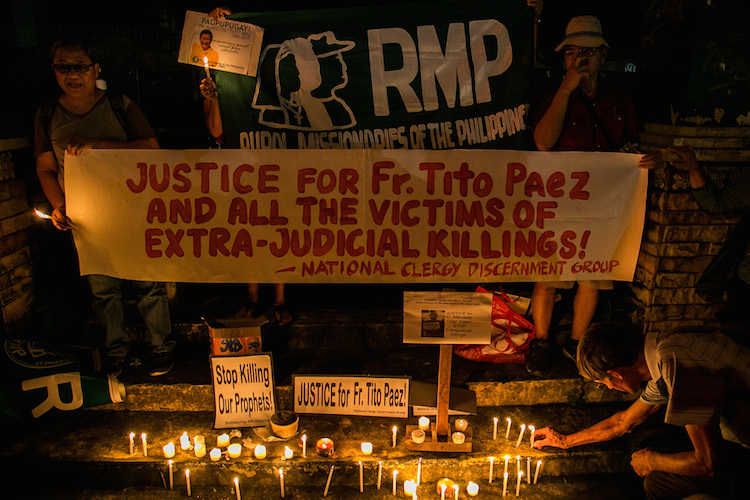 Church workers in the Philippines pay tribute to Father Marcelito Paez who was killed by still unidentified gunmen in Nueva Ecija province on Dec. 4, 2017. (Photo by Mark Saludes)

A Filipino priest killed by still unidentified gunmen last December has been named one of this year's "modern Christian martyrs" at a tribute event in Paris on March 16.

The international pastoral aid organization Aid to the Church in Need included Father Marcelito Paez among those honored during the "Night of the Witnesses."

First held in 2008, the annual event honors persecuted Christians around the world, including priests and religious killed because of their faith and advocacies.

Father Paez's image was placed in Notre Dame Cathedral in Paris with other slain church workers, including French priest Jacques Hamel who was killed by an Islamic extremist in Normandy in 2016.

Also honored were four Missionaries of Charity nuns who were killed by extremist gunmen in Yemen in March 2016.

Bishop Robert Mallari of San Jose Diocese in the northern Philippines said the tribute to Father Paez was a "source of joy for the diocese that is still in mourning his death."

"Recognition of his martyrdom tells us that he died doing the right things. He risked his life for people who needed help," he told ucanews.com.

The 72-year-old priest was shot while on his way home after assisting the release of a political prisoner on Dec. 4.

He was known for his human rights advocacy and was a Rural Missionaries of the Philippines board member at the time of his death.

Jonathan Luciano, national director of Aid to the Church in Need in the Philippines, said Father Paez died a martyr's death even as he "lived his life defending the poor and the oppressed."

"He stands as a reminder for us all to live the faith, and to fight for what is right and just to the point of death," said Luciano.

In a statement, Marc Fromager, director of Aid to the Church in Need in France, said remembering the martyrs once a year is "the very minimum we can do for them."