Sister Eustochia makes a stand for abused women in Flores 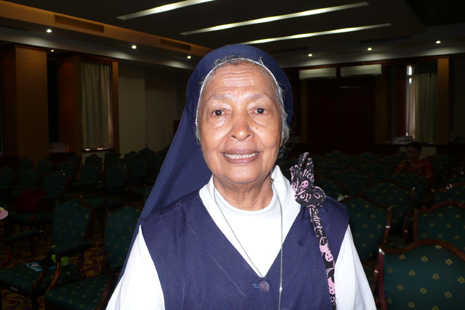 At a meeting of 50 mothers on the Indonesian island of Flores several years ago, Servants of the Holy Spirit Sister Eustochia Monika Nata asked the gathering if their husbands had ever hit them. “Only two mothers said never,” she recalls.

Domestic violence on the 1.8 million strong island is thought to be common, with women bearing the brunt of a patriarchal society where the government has historically neglected the plight of abused females, children included. Experiences such as this, and many others, were formative for the sister, based in Sikka district in the predominantly Catholic province of East Nusa Tenggara. It all started in 1997, when she took an active role in counseling programs for mothers facing domestic violence. At that time there was no data highlighting the scale of the problem – she had merely been moved by the plight of several victims who came to her community house to seek help.

Then in 1998, a Divine Word priest brought a girl who was raped by her father along to the community house. “I tried to protect the girl, but her family came and said that I kidnapped her. I was intimidated,” Sister Eustochia says. Following the formation of the Volunteer Team for Humanity in Flores (TRUK-F) in February 1999, the nun’s workload suddenly surged. A UN-sponsored referendum called overwhelmingly for Timor Leste’s independence from Indonesia, and with that, Jakarta-aligned militias went on the rampage, killing hundreds and destroying infrastructure and buildings. An estimated 250,000 people fled to Indonesia, some into the arms of Sister Eustochia. “I could see the suffering of women who were raped. I often cried … asking why,” she says. “This encouraged me to pay more serious attention to victims of violence.” Over the next 13 years, improvements to women’s security in Flores remained patchy. (Data for 2012 from the TRUK-F says 155 women and children aged between four and 70 became victims of domestic and sexual violence, as well as human trafficking.) NGOs had taken on the role of counselors to victims of abuse, but their resources were stretched. The sister realized that much more needed to be done. The results of a survey she conducted on 652 students from five senior high schools in the district’s capital of Maumere found that nearly all had been abused by their parents – verbal, physical, even rape. She took that survey to the National Commission on Violence against Women, which was a partner of TRUK-F. Some commissioners and central governmental officials visited the town, and to Sister Eustochia’s alarm, explained that these were the first cases of domestic violence they had heard of. The problem simply wasn’t being reported. “This was the beginning. I pushed local legislators to draft a bylaw on protection against women and children becoming victims of violence,” Sister Eustochia says. Following numerous meetings, they completed the draft in July 2012, and the district head approved it on December 31. Despite the hope surrounding the bill, which would compel the local government to step in and assist NGOs working to end domestic violence, including help with healthcare, funding is currently lacking. The newly installed district head, Yoseph Ansar Rera, says the bylaw is the first of its kind. Acknowledging its importance, he says however that “we are still introducing it to local people in coordination with NGOs.” The length of time it has taken to roll out the bylaw provides little comfort for victims who still report shocking abuses. Still being introduced means no benefits yet to a victim of rape. “Only the TRUK-F is beside me,” says a 14-year-old girl called Ber, a victim of rape who has spent the last eight months at the TRUK-F’s office-cum-shelter. “I hope the local government will help and protect us soon. I hope the bylaw will soon materialize.” Now 70 years old, Sister Eustochia was diagnosed with uterine cancer five years ago. Still, her spirit never dies, and she is currently lobbying local legislators to draft a bylaw on human trafficking. “For me, victims of violence are the faces of Jesus. I have to see and help them whenever they come to me … even when I’m sick. It’s time for Jesus to visit me,” she says.