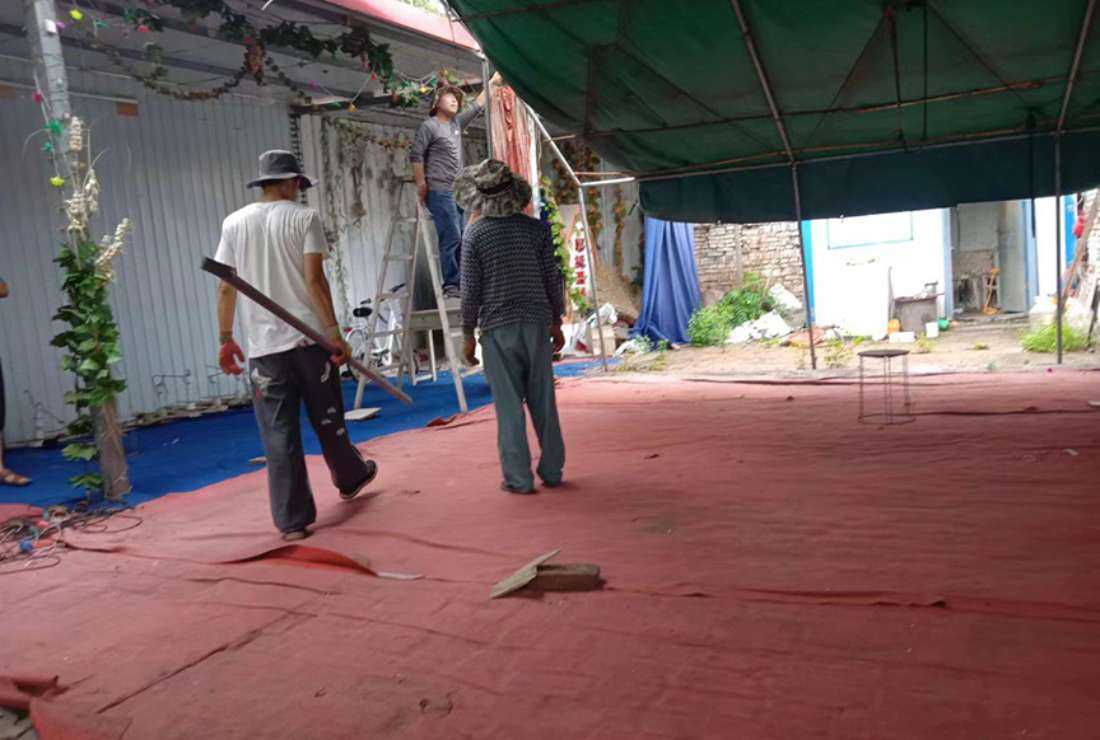 Workers demolish the underground Catholic church in Youtong village of Hebei province of China at the end of last month. (Photo: RFA)

A Catholic priest has blamed the Chinese Communist Party (CCP) for exploiting the China-Vatican agreement for intensifying a crackdown on Catholic clergy for refusing to join a state-run body.

As part of the crackdown an underground church in Youtong, a village in Luancheng district of Shijiazhuang City, was demolished last month, said Father Dong Baolu, a priest from Zhengding diocese in Hebei province.

The church, a large tent that served as a meeting place and prayer venue for thousands, was destroyed on June 27, Radio Free Asia’s (RFA) Mandarin service reported. It was located some 20 kilometers from the state capital, Shijiazhuang City.

The priest, who was hospitalized during the demolition, spoke to reporters, days after the incident.

He said the demolition took place after he refused to sign an agreement to join the state-sanctioned Chinese Catholic Patriotic Association, unlike most clergy in Zhengding diocese.

"I am the remaining one among more than 100 priests, certainly, they will not spare me"

Father Baolu noted that due to his unwillingness to join the CCPA and obey “state religious management” orders, the authorities decided not to allow local Catholics to have their “meeting point” anymore.

The priest said that most clergy in the diocese have signed the agreement to join the government-approved church, but he has been reluctant to do so.

“I am the only one left. Do you think they’d let me pass? I am the remaining one among more than 100 priests, certainly, they will not spare me,” RFA quoted the priest as saying.

The clergyman noted that church members were afraid he might be arrested and taken away, so they insisted he get hospitalized first.

Father Baolu says he believes the local underground church has been facing a precarious situation since the Vatican-China provisional agreement was signed in 2018.

The secretive deal, initially signed for two years and renewed for another two years in 2020, allows the CCP to have a say in Catholic bishop appointments in China. For the Vatican, the deal is an effort to unify millions of Chinese Catholics split between the state-approved patriotic church and the Vatican-aligned underground church.

However, since the signing of the deal, observers and rights groups have documented rising pressure and persecution on clergy and laypeople belonging to the underground church to force them to join the CCPA.

"They have been my responsibility. I will continue to take care of them"

This has continued despite the Vatican reportedly asking Chinese authorities to respect those “conscientious objectors” who object to the Vatican-China deal.

The priest also pointed out that pressure has been mounting on underground clergy since China adopted the "Administrative Measures for Religious Clerics" last year. It requires religious clerics to enlist with the religious department in a prescribed format set by China’s State Administration for Religious Affairs.

He lamented that with the underground church gone, local Catholics have been feeling disheartened.

“The church members have been with me for so many years. They have been my responsibility. I will continue to take care of them,” he said.

Pope Francis has said that he understands the Sino-Vatican agreement is not ideal, but he still hopes to renew the agreement in October as he considers “dialogue with China” necessary.

Critics say the Vatican should pay heed to the suffering Chinese Catholics and should not compromise for the sake of the deal.

"I would like to call on the Vatican to listen to the voices of the local Catholics and the faithful churches in other regions,” said Chinese Pastor Liu Yi, now based in California, following the crackdown on the underground church in Hebei.

“[The Vatican] should not refrain from criticizing the Chinese government when needed. By compromising with the Patriotic Church, it must not become an accomplice of the autocratic dictatorship and religious persecutors," he added.