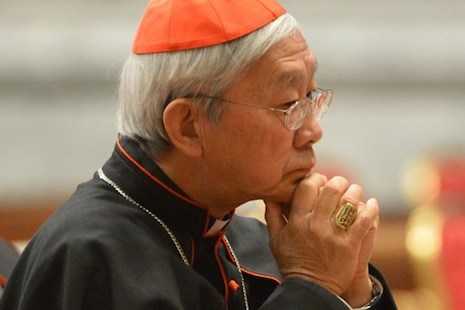 Then at the end of December, the voice of The Vatican’s Secretary of State Cardinal Pietro Parolin added weight to the news: “Yes, the prospects are promising,” he was quoted as saying in an interview with Rivista San Francesco. “Both sides are willing to talk.”

Among my friends, who for a long time have remained concerned with what happens to the Church in China, there is a sense of disbelief. We find it difficult to go along with this optimism, they say. We do not see any sign that would encourage the hope that the Chinese Communists are about to change their restrictive religious policy.

Now in the past few weeks we see two interviews published by Vatican Insider: Two bishops interviewed by Gianni Valente, a reporter working for Fides, the News Agency of the Congregation for the Evangelization of Peoples.

While reading these interviews, I was left with a bitter taste in my mouth. Valente appears to be sending us this message: “Two bishops in China, in communion with the pope and who have paid for this, their loyalty, are fully in support of a Sino-Vatican rapprochement. You people who refuse to share this enthusiasm had better shut up.”

Before my comments on some of the comments in these interviews, I would like to make two preliminary points:

Those who go into China to interview Church people should be aware that they are not free and cannot speak freely, otherwise something may happen to them at the hands of the Chinese authorities, as in the case of Monsignor Thaddeus Ma of Shanghai, who remains in detention.

To suppose that they are free is simply naïve. To interview them, knowing that they are not free, is cruel and also unfair to the readers who may be misled.

To my disappointment, I noticed that Valente, a respectable reporter, used leading questions in these two interviews, putting words in the mouths of those interviewed. For example, talking to Monsignor Joseph Wei Jingyi, Bishop of Qiqihar, about the division between Catholics in the so-called official and underground communities, he adds: “Which [division] has often been enhanced by personal ambitions and power struggles.”

When talking later about the Sino-Vatican negotiations, he says: “For someone, if the Holy See deals with the Chinese government, she risks appearing ready for compromise or even ready to sell herself out.”

Similarly, in the interview with Monsignor Joseph Han Zhi-hai, Bishop of Lanzou, talking about the dialogue between the Holy See and Beijing, he adds: “Will there not be the possibility that people will consider any aperture, any attempt to reach an agreement, a wrong and suicidal choice?”

In the interview with Monsignor Wei, he answers the problem that exists between China and the Vatican very well, despite Valente’s misleading introductory words.

“There is no need to go back to the history of 2,000 years. The actual problem, the reason for the present division of official and underground communities is only one. In present day China, the two communities are the outcome of pressure from outside themselves. The Church was divided as an answer to the way the Communist government deals with her. Then, in the course of time, the division has become crystallized,” answers Monsignor Wei.

So, since there is only one problem, the so-called historical mistakes of the two sides have not much to do with all of this. It would be sufficient if the Chinese government were to change its way of dealing with the Church. Then the problem would be solved.

The question posed by Valente — “Who must make the first step?” — is superfluous. Monsignor Wei answers this very well: “The Church has already made the first step. See all the efforts Pope Francis is making to show his will for a dialogue.”

In his leading questions, Valente appears to want to make people understand that there are persons who oppose a dialogue between the Holy See and Beijing who consider every such step as a betrayal of the Church.

This is a big misunderstanding and causes other misunderstandings. Nobody can deny that without dialogue there cannot be any solution to any problem. But for the dialogue to succeed, goodwill on both sides is required.

On the side of Rome, it is obvious that such goodwill exists.

What about Beijing? Optimism without foundation in supposing that Beijing has goodwill is dangerous. It becomes little more than wishful thinking.

Our bottom line is what Pope Francis calls “our identity” (as noted in the Mass concelebrated with Asian bishops in South Korea in August), and is the Catholic ecclesiology, as explained in the 2007 letter of then Pope Benedict XVI to the Church in China issued as a reminder of where the Church stands. Pope Francis himself referred to this letter on the papal plane returning from South Korea.

In all these years of frayed relations, the situation of the Church in China has moved further and further away from this bottom line.

With an independent Church, with ordinations of bishops without papal mandate, we have a de facto schismatic Church, even if we do not like to call her such. What makes us hope that the Communist government is now ready to go back to our bottom line and allow our Catholic Church to become truly Catholic again?

The Church in China is in a gravely abnormal situation. It is the government that runs the Church. For things to turn normal, we need a miracle. The problems to be solved are many.

Certainly, the most serious problem is that of the nomination of bishops. In all the years I have been a member of the Commission for the Church in China, I have never received any information about whether any negotiations were going on, or with what result. So I do not know what kind of agreement they may be about to conclude.

I only wish to remind the Holy See that the word ‘election’ has a very peculiar meaning in China. I want them also to remember that in China the Episcopal Conference simply does not exist. Only in name does it exist.

Another crucial problem is the Chinese Catholic Patriotic Association (CCPA).

From what we continue to see and hear it will be impossible to eliminate the CCPA anytime soon. Then, what hope have we that things may turn normal?

Monsignor Wei says he thinks that the CCPA may change its nature. I am afraid that, as with the name of the organization, the reality will continue more or less as it is. In this kind of game of words, the Holy See is certainly not the equal of the Chinese Communist Party.

These are all serious cases of irregularity. If the Holy See does not put things right, her credibility will be endangered.

Then, in the future final arrangement into one unified structure, how will the rights of the two communities be balanced? The supreme rule should be the good of the faithful, but will the Chinese Communists consent to it?

Cardinal Parolin said in December we should do things acting from theological considerations. I suppose this to mean the point of view of truth and justice. If the Communist side disagrees with this and is not ready to make any compromise, what can we do to achieve a good agreement? The temptation to reach a conclusion at any cost is not imaginary. In these last years, have we not conceded too much to the other side?

Recently, too, the same Cardinal Parolin, in commemorating Cardinal Agostino Casaroli, used superlative expressions in praise of the famous Ostpolitik promoted by Cardinal Casaroli in dealing with Communist Eastern Europe.

Cardinal Parolin even described those who refused the control of the government as “systematic opponents” of the government, as “gladiators”, as “people who like to show themselves on the political arena”. This attitude does little to allay our fears and help our confidence.

Monsignor Wei makes his most important point at the conclusion of his interview: “As batteries are essential for the functioning of so many modern gadgets, so prayer is what keeps the faith alive.”

Only with faith shall we be able to accept a complete failure in the present, and not to sacrifice our convictions and the discipline of the Church for an immediate success. No agreement is better than a bad agreement. We cannot pro bono pacis tolerate an agreement which betrays our identity.

I don’t want to spend too many words on the interview of Valente with Monsignor Han. The prelate has strongly expressed his refusal of “people who, from the outside, pretend to give commands on what other people should or should not do regarding their faith”.

Pope Emeritus Benedict XVI is surely not one “from the outside”. Obviously, the former pontiff has, like everybody, the desire to one day see the division between China’s official and underground Church disappear.

However, this unification is not possible until the government stops demanding conditions that are against the collective Catholic conscience. I am happy to see that Monsignor Han has been convinced that the moment of real union has not yet come.

Finally, we should remember that at this moment we continue to receive contrasting news about the fate of Bishop Shi Enxiang of Yixian, who 14 years ago was violently taken away from his pastoral ministry and the affection of his relatives. Some people announced his death while others have denied such reports.

When shall we be given confirmed information about this heroic pastor who would turn 94 years old this month? Is he dead? If so, when did he die? Where did he die? Will his relatives be given back his body or just his ashes? Will Valente be able to give us some help in finding out more about this?

Then there is the case of another disappeared bishop, Su Zhimin of Baoding. Is he still alive? Where are they detaining him?

When we see these two venerable bishops deprived of the most fundamental right of human dignity, it is difficult for us to imagine that the representatives of the Holy See can sit down and talk to the Communist Party without chagrin.

Cardinal Joseph Zen is a retired bishop of Hong Kong.