Passengers disembark from a ferry after arriving in Goan capital Panaji. A surge in migrants to Goa changing their names to appear as Goan is raising suspicions about their motives in local circles. (Photo by Bosco de Souza Eremita)

Thousands of non-Christian migrants are going to the former Portuguese colony of Goa wanting to adopt Portuguese Christian and family names.

This desire, some say, comes from a quest to falsely claim Goan ancestry to gain access to rights and privileges enjoyed by Goan people.

“There could be government officials involved in this racket,” he told media, pointing a finger at the state government run by the pro-Hindu Bharatiya Janata Party (BJP).

A state law — Change of Name and Surname Act — stipulates that names and surnames can be changed in Goa only if applicants are born there.

The process involves applying to the state registrar, who examines the application before approving the change. The law also mandates placing a notice in a local newspaper showing the old and new names and the person’s address.

“A person not born in Goa cannot change his name or surname there. If it is done, it is illegal,” state registrar Ashutosh Apte said.

Every year, an average of 500 Goan-born people change their given names, surnames or both, according to local media reports quoting government data.

Some give a change of religion as a reason but others say they are simply changing their name to the one they are known by in their locality. But there are illegal changes too. Some publicize this change in newspapers after using agents to affect the name changes in documents.

With an average of six notices appearing in newspapers per day, the number of illegal name changes could be at least 1,500 per year, local people observe. 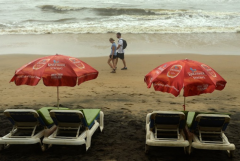 Viriato Fernandes, of civil group Goencho Avaz (voice of Goans), told ucanews.com that there are about 1,600 illegal name changes made each year. He said his organization, which promotes the interests of Goan people, will seek an investigation into this “scandalous practice.”

Many doubt the rush to change names is to claim pre-colonial ancestry as the Portuguese government only offers citizenship to people born in Goa before India annexed the colony on Dec. 18, 1962.

People born before Dec. 19, 1961, are eligible for citizenship, as are their children.

However, ineligible Indians, particularly from and around Daman and Diu, a former Portuguese colony near Gujarat, exploited the offer and gained Portuguese citizenship before eventually migrating to Europe.

Records now prove that several people from Gujarat adopted the identities of dead people buried in Goa to apply for Portuguese passports and migrate to Europe.

But others like Paulo Colaco say they adopted a Portuguese name for practical reasons. The Hindu from neighboring Karnataka state said he changed the name “because it’s easier to deal with tourists as they are friendlier once they hear such names,” he said.

“Foreigners are more open in their dealings. They are suspicious of others with non-Christian names and look down on them,” said Colaco, who declined to reveal his original name. “I like to be looked upon as a Goan.”

He said he speaks English, dresses like a Goan and “even my mannerisms are Goan.”

He said he chose Colaco as his name because his landlord had that name. But he said the moment the landlord found out about the name change, “he threw me out of my apartment.”

The landlord was justified because “there have been several cases of land fraud by producing fake documents with false names,” said Euclid Heredia, a lawyer.

Congress Party lawmaker Lourenco wants a proper investigation into how migrants change their names so easily.

“They do these changes without encountering any obstacle. This is of serious concern and the government ought to initiate a thorough investigation in the matter,” he said.

In some cases, it is alleged names are changed to grab huge tracts of land belonging to local people who have migrated overseas.

“One trick is to identify properties belonging to owners overseas, or who have died, then use their names to compile false documents making them out to be the owner,” according to Fernandes from Goencho Avaz.

The property is then sold several times through agents so that it becomes difficult to trace the person who first doctored the land documents.

“Investigations, if at all started, get delayed because the investigating officials get transferred, so it could take years before justice can be done, if at all,” he said.