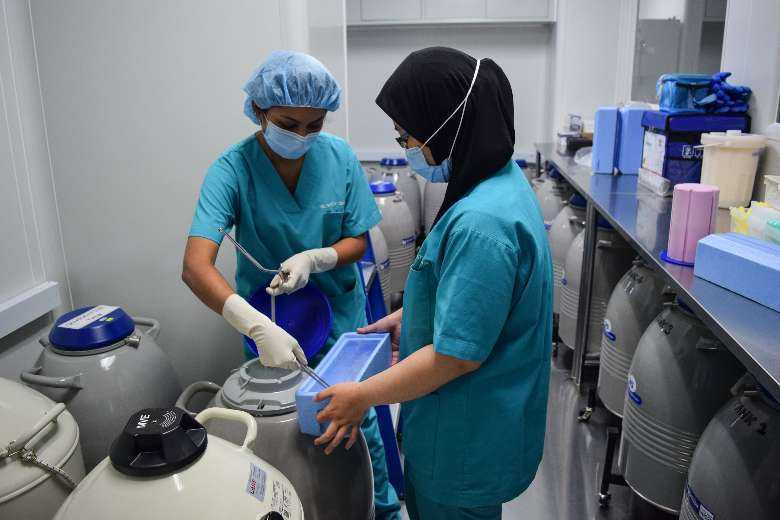 More women in work-obsessed Singapore are known to travel overseas to clinics such as this fertility center in Kaula Lumpur in Malaysia to get their eggs frozen. (Photo: AFP)

After much debate, it was recently announced that Singapore will permit elective egg freezing from 2023 onward for fertility preservation of women without medical indications, commonly referred to as social egg freezing.

All women aged 21-35 are eligible to undergo this procedure, regardless of marital status, but they must be married in order to subsequently utilize their frozen eggs for IVF (in vitro fertilization) and other assisted reproduction procedures.

Nevertheless, it must be noted that this elective medical procedure is highly expensive, which would likely make it unaffordable to lower-income women.

Direct government subsidies for elective egg freezing are difficult to justify given that it is non-essential for the sustenance of life or health. There is no country in the world where social egg freezing is being subsidized by the state.

One scheme to make this procedure more affordable is “freeze and share,” in which medical fees are heavily subsidized for women freezing their eggs in return for a donation of some of their surgically extracted eggs to other patients. Because financial subsidies come directly from recipient patients, there are no additional costs to government coffers, and the problem of shortage of donated eggs for IVF treatment can readily be overcome. However, there are numerous ethical pitfalls to such a scheme.

First, subsidies on medical fees can be viewed as a form of undue financial inducement for women to undergo this invasive procedure without a valid medical reason while exposing them to unnecessary risks from ovarian hyperstimulation syndrome (OHS), a medical condition whereby the body overreacts to injected hormones, which can potentially be life-threatening.

"Worse still, the offer of generous financial subsidies might create cognitive dissonance because it is not just about freezing their eggs, as there is going to be a baby with their genetic material out there"

The patient’s judgment and perception of such medical risks may potentially be blurred and clouded by the offer of generous medical fee subsidies, thereby trespassing on her autonomous decision-making process.

Worse still, the offer of generous financial subsidies might create cognitive dissonance because it is not just about freezing their eggs, as there is going to be a baby with their genetic material out there.

In the future, on reflecting on their actions, women who participated in “freeze and share” programs may realize that they value such genetic connection more than a direct donor, who may see the egg as merely a cell.

Because such programs offer immediate savings on the costs of egg freezing, this might appear attractive to lower-income women. Nevertheless, they often do not anticipate future costs such as storage fees and the high price of doing IVF when attempting to conceive a child.

If women participate in “freeze and share” programs because they are poor in the first place, what are the chances of them using their frozen eggs through IVF in the future, if they still remain poor?

Second, the asynchronous nature of “freeze and share” would mean that the egg donor will only learn much later if she is unable to conceive with her own frozen eggs while still being unsure of whether any offspring had been born from her donation.

It must be noted that the chances of having a child through egg freezing are in no way guaranteed due to its relatively low success rates of 2-12 percent per frozen egg, according to the American Society for Reproductive Medicine (ASRM).

By contrast, donated eggs would most likely not have been frozen when used for IVF, which would translate to significantly higher success rates.

This poses an ethical problem because women who ultimately fail to get pregnant with their frozen eggs would undoubtedly suffer from immense psychological problems due to the unsettling possibility of them having unknown anonymous donor offspring.

"In many developed countries, donor anonymity has been abolished in view of the inherent legal rights of donor-conceived offspring to know the identity of their donor parent and associated family medical history"

Hence, “freeze and share” would likely exclude lower-income women with less education and fewer desirable traits. Hence it is unlikely that such a scheme would make egg freezing more accessible and affordable to economically-disadvantaged women.

Fourth, outdated laws on egg donor anonymity in Singapore might create ethical problems with the anticipated surge in egg donation cases if "freeze and share” were allowed.

In many developed countries, donor anonymity has been abolished in view of the inherent legal rights of donor-conceived offspring to know the identity of their donor parent and associated family medical history.

Numerous sociological studies and news media stories have reported that donor-conceived offspring often suffer from psychological problems and identity crises while growing up without knowing the identity of their anonymous donor parent.

More importantly, they are left completely in the dark with respect to their donor parent’s family medical history. It is well known that predisposition to various diseases such as breast cancer, type 2 diabetes, cardiovascular diseases and senile dementia are heritable, and it is only right that donor-conceived offspring should get access to such relevant life-saving medical information.

Additionally, outdated donor anonymity laws in Singapore increase the risk of accidental incest between the egg donor’s legitimate children and unknown offspring from the donation.

In some countries such as Britain, donors and donor-conceived offspring can get access to information on the number of children born from each donor, together with their non-identifying personal information such as sex and year of birth.

"Worse still, there is the possibility of fertility clinics engaging in covert egg trading and profiteering in 'freeze and share' programs — for example, by marking up medical fees to unsuspecting recipient patients"

In the near future, when genetic testing becomes a universal norm in health care, there will likely be numerous donor-conceived offspring inadvertently and unexpectedly learning the truth of their conception through such tests, resulting in much shock, heartbreak and emotional trauma for both themselves and their legal parents who raised them.

It is anticipated that many of such donor-conceived offspring will have strong yearnings to know their identity and have contact with their anonymous donor parent. Hence, there is the unsettling possibility of “freeze and share” donors being unexpectedly contacted by their unknown offspring in the future via DNA testing and online genetic matching, thereby intruding into their personal lives and privacy.

Fifth, there are inherent conflicts of interests faced by medical doctors and fertility clinics operating “freeze and share” programs.

To boost the availability of donor eggs, fertility clinics may aggressively advertise generous medical fee subsidies for egg freezing, thus abetting and enticing many young women to undergo this invasive procedure at substantial risks to themselves without a valid medical reason so that they would not miss out on such an attractive opportunity.

Worse still, there is the possibility of fertility clinics engaging in covert egg trading and profiteering in “freeze and share” programs — for example, by marking up medical fees to unsuspecting recipient patients.

Moreover, fertility doctors face an obvious conflict of interest in soliciting and encouraging their patients to donate eggs via “freeze and share” programs because they will be earning additional medical fees by performing the egg donation procedure on other patients.

In conclusion, “freeze and share” egg donation programs should not be permitted in Singapore in view of the numerous aforementioned ethical problems associated with it.

* Dr. Alexis Heng Boon Chin is an associate professor of biomedical science at Peking University, China. He previously worked in the field of human clinical assisted reproduction research in Singapore and has authored 50 international journal publications on ethical and legal issues relating to new reproductive technologies in addition to publishing more than 250 scientific journal articles. The views in this article are those of the author and do not necessarily reflect the official editorial position of UCA News.