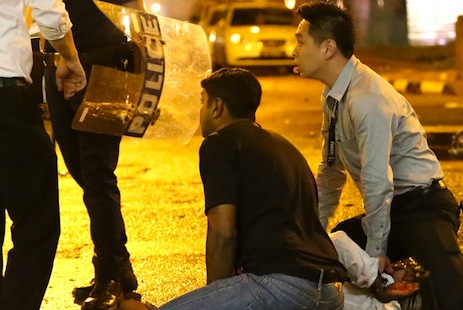 A crowd of about 400 people set fire to vehicles and clashed with police in the Indian district of Singapore late on Sunday after a man was hit and killed by a bus, the first major riot in the city-state for more than 40 years.

Police said they had arrested 27 suspects after the riot, which started after a private bus hit and killed a 33-year-old Indian national in the Little India area.

The riot is likely to fuel concerns about discontent among low-paid foreign workers. Last year, Singapore saw its biggest outbreak of labour unrest in years when around 170 bus drivers from mainland China went on strike illegally.

Several videos posted online showed a crowd of people smashing the windscreen of the bus while the victim remained trapped under the vehicle.

Footage on Channel NewsAsia showed several vehicles in flames and debris strewn across Racecourse Road, one of the main thoroughfares in Little India. Many other private cars were reported to have been damaged.

Police said the 27 arrested were of south Asian origin and that they expected to make more arrests in coming days. About 300 officers were sent on to the streets to quell the riot.

A statement by the Civil Defence Force (CDF), which oversees ambulances and fire fighting, said rescuers trying to remove the body had "projectiles" thrown at them when they arrived on the scene.

Footage showed police cars being flipped over and several vehicles on fire. The CDF said an ambulance, three police cars and a motorbike were burnt.

"Shortly after, a riot broke out involving a crowd of about 400 subjects," it said in a statement, adding that about 10 police officers were injured.