Catholics have contributed through education, health care and social welfare for two centuries 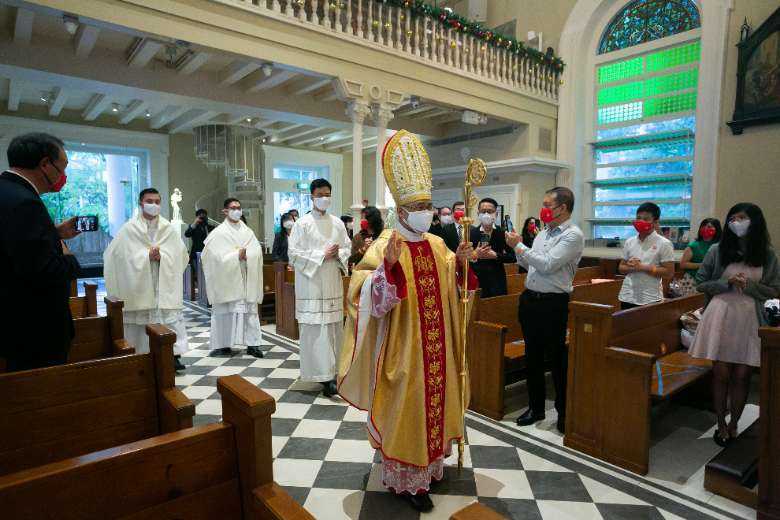 Archbishop William Goh of Singapore leads a procession during a special Mass at the Good Shepherd Cathedral on Dec. 11 to mark the end of 200th anniversary celebrations of the Catholic Church in the city state. (Photo: Singapore Archdiocese)

Singapore Prime Minister Lee Hsien Loong has praised Catholics for their contributions to nation building through education, health care and social welfare and promoting harmony in the multi-religious city state for two centuries.

In a message posted on Facebook, the premier said he was happy to join the Catholic community for Mass at the Cathedral of the Good Shepherd, the nation’s oldest Catholic church, for the closing of celebrations of the 200th anniversary of the Singapore Church on Dec. 11.

Concurrent Masses were held in all 32 Catholic churches in Singapore at 6pm and, for the first time in history, the simultaneous ringing of bells by all 32 churches were sounded throughout the island for one minute.

“Did you hear church bells ringing this evening? You probably caught the closing celebrations of the 200th anniversary of the Catholic Church here,” PM Lee said in the message.

“I was happy to join the Catholic community for Mass at the Cathedral of the Good Shepherd. Also watched a video about how Catholicism first arrived on our shores, and how the Catholic Church has contributed to our community for two centuries, through education, health care and social welfare.”

In our multi-religious society, Catholics thrive and coexist in harmony with the other religions, he added.

In spite of a downward trend in many countries where people are losing faith in God, the recent census shows that we have grown in strength over the last five years

Archbishop William Goh of Singapore concelebrated the Mass along with Archbishop Marek Zalewski, the apostolic nuncio. Among the dignitaries present were the PM’s wife, Madam Ho Ching, Minister for Culture, Community and Youth Edwin Tong and representatives from the French and Portuguese embassies in recognition of early European missionaries who brought the Catholic faith to Singapore.

In his homily Archbishop Goh said the Church continues to thrive in Singapore whereas it is experiencing a decline in many countries.

“We are called to give thanks for what the Lord is doing through our Church. In spite of a downward trend in many countries where people are losing faith in God, the recent census shows that we have grown in strength over the last five years,” the prelate said.

He noted that in the past centuries the Church has produced good leaders for society, government, the corporate world and charitable organizations. “We have formed them with strong ethical, moral and spiritual values to lead our community.”

While the government is secular, it is not hostile to religions but “respectful and encouraging of religions, maintaining neutrality to all, and seeing us as partners in the development of the social, moral and spiritual values of our people,” Archbishop Goh said.

The unique values of interreligious harmony in Singapore, built over many generations, encourage religions to be respectful and supportive of each other, he noted.

About 12,000 people attended various events and activities during the eight-day festival from Dec. 4-11 to mark the closing of the 200th anniversary, according to a press release from Singapore Archdiocese. About 6,000 people joined concurrent Masses in churches.

The celebrations included tours, performances, artistic displays and activities including community engagement, talks and spirituality programs, which were restricted and held with precautionary measures due to the Covid-19 pandemic.

Online broadcasts of the year-long programs, known as the Catholic200SG Festival, garnered more than one million views during the anniversary year.

Catholic missionaries arrived in Singapore shortly after Sir Stamford Raffles made it a British colony in 1819.

St. Laurent Marie Joseph Imbert (1796-1839), a French Catholic priest of the Paris Foreign Missions Society (MEP), landed in Singapore from France on Dec. 11, 1821, en route to his missionary assignments to Malaysia and China.

Father Laurent was martyred in Korea in 1839 and canonized by Pope John Paul II in 1984. The date of Father Laurent’s arrival in Singapore is historically known as the beginning of the Catholic Church in Singapore.

Singapore is a multi-religious and multi-ethnic nation with an estimated population of 5.6 million. Most Chinese are Buddhists and most Malays are Muslims. Christians make up about 15 percent of the population.

The Archdiocese of Singapore, which covers the entire island, has about 360,000 Catholics.